You couldn’t have produced a book like Jason Aaron’s The Mighty Thor twenty years ago. Maybe if you had, it wouldn’t be as entertaining as it is now; more likely we’d have something resembling Red Sonja with lightning hammers. The current run has been something of a pleasant novelty amongst the myriad generic capebooks currently on shelves; a clear story-and-character-driven piece which cares little for much of the superpowered crossover shenanigans going on around it. It’s written as both an empowering feminist paean, a thoughtful meditation on terminal illness, and a straightforward drama with superpowers. It’s what you’d get if you fused Supergirl, The Big C, and the political machinations of Game of Thrones. It is, pure and simple, a really great book. 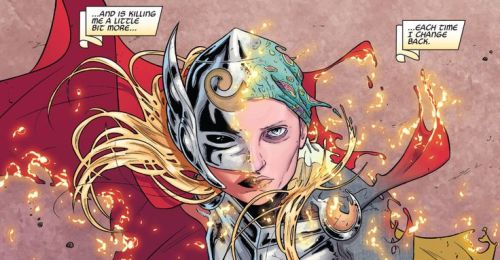 Thunder in Her Veins is the latest volume of Aaron’s epic Thor yarn, which began all the way back in 2013’s The God Butcher. In the years since, the previously-masculine Thor is now the tough-ass Dr. Jane Foster, the Odinson’s on-again-off-again romantic interest. Man-Thor has been told he’s no longer worthy to swing Mjolnir into the faces of unsuspecting supervillains, so the mantle’s been passed to Jane. As the new Thor, Jane flies around saving the Avengers, the Earth and the rest of the Nine Realms whilst slowly dying of breast cancer; wielding the hammer gives her strength, though it purges her system of chemotherapy drugs. While Jane considers the catch-22 of either a slow death from chemo or a quicker one from fighting bad guys, political movements within the Nine Realms threaten to destabilise Asgardia and unleash the evil power of Malekith, Lord of the Dark Elves and insatiable scenery-vore.

I’ve talked briefly about Aaron’s new take on Thor before, and I stand by what I said then as now. Jane Foster is a refreshingly different Thor to the original Odinson, at once embodying the old Thor’s braggadocio but tempering it with a more level-headed, sensible approach to superheroism. Where Man-Thor would’ve knocked Loki’s head off at the first sign of deception, Jane’s Thor instead takes the time to listen to Loki’s explanation of his behaviour, then knock his head off when his words show he really deserves it. She kicks ass, but isn’t the raging bull her masculine counterpart could be.

Her civilian identity’s impending death also lends a tragic element to the affair. Thunder in Her Veins goes to great lengths to stress that there is no way the magicks of Asgardia or the high-tech gadgets of Earth’s Mightiest Heroes will be able to prevent the cancer from killing Jane Foster. The book has a grounded, human narrative enveloped within Thor‘s usually medieval superhero trappings; would you rather try and live longer at the expense of being alive, or cut short the journey in order to go beat up Frost Giants? Unsurprisingly, the book opts largely for the latter, though it adds nuance to the moments when Jane firmly decides she’s going to fly off with her hammer, cancer be damned.

The book also thumbs its nose at errant critics through a meta-undertaking similar to the Captain America: Sam Wilson series. Asgardia’s walls are plastered with

WANTED posters declaring Jane’s Thor is an impostor; although the story’s conceit is that Jane’s powers were illegitimately given to her, the subtext, representing some of the wretched real world criticisms the book’s received about a woman wearing Thor’s mantle, is a fairly unsubtle one. Suffice it to say, neither Jason Aaron nor Jane herself seem to give a frosted lump of duck snot about whether their respective critics think she’s “worthy” enough to be Thor.

Without venturing too far into spoiler territory, Thunder‘s biggest problem is its villains. Much like 2013’s big-screen epic Thor: The Dark World, Dark Elf Lord Malekith is once again the least interesting element of the proceedings, an unholy fusion of Dick Dastardly moustache-twirling and gothic hair-metal attire. He wants to discredit Thor and take over the Nine Realms because…he’s got nothing better to do? Besides garden-variety megalomania, Thunder – along with the preceding volumes of Aaron’s run – offers little to make Malekith an engaging antagonist. The scenery-chewing and overly-flamboyant villainy is somewhat fun on a base, Saturday-morning-cartoon level, but seems at odds with the much more thoughtful story going on with Jane. Malekith’s human co-conspirator – a character so completely engrossing and memorable that I forgot his name was Dario Agger until I Googled it just now – is a similarly weak presence.

I’m also mighty (ha!) confused by what’s going on with Odin. Tho

ugh previous Thor stories have done well in depicting the Allfather as a staunch guardian figure whose antagonism towards Thor stems from a protective outlook, Thunder can’t seem to decide whether he legitimately has problems with Jane or if he’s being influenced by someone else (more specifically, a character whose last comic book appearance was in a story I had multiple issues with). As it stands, Odin’s logic for opposing the new Thor is nonexistent, leaving a feeling that Thunder is making Odin a quasi-villain for some other, as-yet-undetermined purpose. 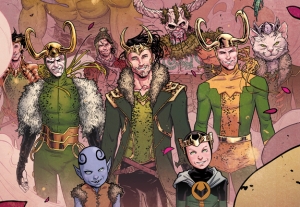 Dialogue is Aaron’s usual standard of excellence, though Loki’s words make him appear even more slippery and untrustworthy than he already is with that beard made of toothbrush bristles. Having Jane as the new Thor also lends her dialogue a bit of 21st-century-snark to complement the appropriately operatic introspection her Norse alter ego has.

Artwork is…well, it’s hard for me to put into words how much I adore Russell Dauterman’s art. While it’s admittedly a

little overloaded with colour and frenetic action in the battle scenes, especially in comparison to how those aspects were handled in past volumes, Dauterman still makes The Mighty Thor one of the most visually delicious books on the shelf (Loki’s toothbrush beard notwithstanding).

Though it ends on a slightly underwhelming cliffhanger, Thunder In Her Veins is still a top-notch volume in a fantastic arc. It’s a decent jumping-on point for new readers as well as an excellent new chapter in Jason Aaron’s ongoing Thor epic, it’s got some quality writing, and it’s very, very pretty; a solid book about a dying woman kicking ass with a big hammer. 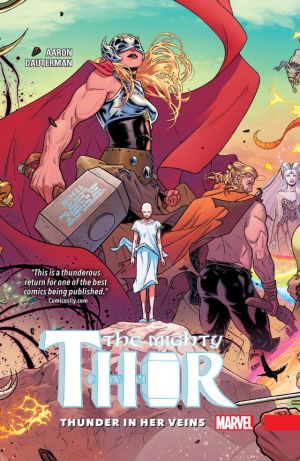 BEST QUOTE: “[after having his head knocked off his shoulder] *Sigh*.” – Loki