I struggled to muster the drive to crack this one open, guys. I was not expecting anything good. I was not expecting anything fun. I was not expecting the book to be any better than its prologue/predecessor/precede/pre-something-else Trinity War, which was as bland and flavourless as a Pringle you’ve sucked the salt from. Reception to each issue as it was being released did not fill me with any kind of good feeling, and once again to preemptively lament DC’s current run of either boring or foul work for any character who isn’t Batman. To top it off, we’ve literally been here before – a villains-only period of book releases permeated DC a mere five years ago, for cryin’ out loud. At least back then we got some pretty covers in exchange for some uninspired – and, in some cases, damn dirty – stories.

But muster drive I did, and having finished Forever Evil cover-to-cover can only either affirm my belief that the DC ‘verse is on a highway to a hell of its own devising or surprise me by being at least a little bit interesting and not in the least bit like that stupid Avengers vs. X-Men business a couple years back.

I just want to point out, I don’t actually enjoy tearing strips out of DC. No, sorry that’s wrong; I enjoy it the same way one enjoys pointing out a vital flaw or ill quote made by a detestable politician. You’re smug you found a petard with which to hoist the offending party, but you’re also lamenting the fact you have to find that petard for someone allegedly working for the betterment of your country. DC make Batman, my favourite comic book character. They made the best Green Lantern run I’ve ever read. They made me think twice about Superman’s value as a character. Hell, they wrote Watchmen. I don’t give a damn if that was nearly thirty years ago, that statement should still carry weight today. The company that gave you Watchmen is now giving you bland garbage like Trinity War and that predictably-awful Superman/Wonder Woman series.

So believe me when I tell you it brings me no joy to call Forever Evil a derivative, soulless piece of feckless garbage made in much the same spirit as that The Amazing Spider-Man 2 movie that also was made without a heart earlier this year and driven mostly by the need for more greenback. The book seems tailor-made to shake up the status quo a little, leave some sequel hooks and ultimately offer a muddled narrative that attempts complexity and multiple layers but fails to make either aspect work in its favour.

To wit, the Justice League have all ‘died’ following Trinity War‘s rushed finale and the Crime Syndicate of Earth-3 have arrived with some kind of prisoner in tow. After blotting out the sun, laying waste to a good chunk of the world and inadvertently revealing 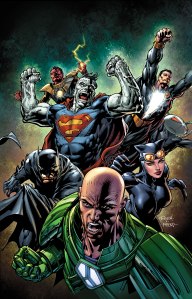 Nightwing’s true identity as Dick Grayson (and don’t worry, we’ll come back to that) the Syndicate declare our Earth now belongs to them. In opposition, Lex Luthor and a bunch of named villains band together to initially comply with and later outright rebel against the Syndicate to fight another day.

Forever Evil is not an entirely indicative title for the book – a better one might’ve been How Lex Luthor Saved The World And Also Made Himself a Pet Bizarro. Might be lengthier, but it’s more relevant to the book’s content. This is predominantly a Luthor gig, following his introspective narration and quest to rid the world of the Syndicate while the other villains dally about getting diluted into two-dimensional shadows of themselves.

That latter point is the book’s first big problem. The only characters given any weight or depth whatsoever are Luthor, Superwoman (Wonder Woman’s Earth-3 doppelganger) and Power Ring (Earth-3’s Green Lantern analogue). Everyone else gets a perfunctory couple of lines and those who get more are so flat and uninteresting that it makes you forget these are great, awesome characters from pre-existing works. The Sinestro of this book doesn’t tally with the characterisation Geoff Johns gave him in Green Lantern, particularly egregious since Johns is the writer of Forever Evil. Ditto that for the suddenly singular sociopathic Black Manta, or the street-smart Captain Cold, or even Batman. Yeah, you read that right; Geoff Johns found a way to make Batman uninteresting when he’s not off finding Chekhov’s guns to aid in the big finale. That’s one hell of a black mark all on its own.

The second big problem is the story. Let’s be charitable and, rather than call this a collection of scenes that pretend at having a narrative purpose, instead just say the story of Forever Evil is quite lacking. We’re trying to find where the Justice League have gone; no, wait, we’re trying to stop the Crime Syndicate; no, now we’re trying to make an alliance between Batman and Lex Luthor; ok, now it’s a climactic fight to the death between Earth-3’s answer to Shazam and all the other characters who aren’t either dead or off the grid. There’s no build-up, no tension, no real sense of stakes or plausible threat, and when the actual big threat does show up in the most eleventh hour manner possible near the book’s conclusion it’s roundly defeated because Lex Luthor’s decided to crib a few notes from Batman’s playbook and actually be wildly competent now.

Hence the third problem: Lex Luthor. I’m all in favour of dimensionality in villains or exploring their possibilities as heroic – or, at

least, anti-heroic – characters who are able to show a different side of themselves. Referring once again to his work with Sinestro, Johns is a master at adding fresh layers to seemingly one-note characters who you’d never dream of sympathising with (see also his work with Black Manta in Aquaman, though Sinestro is a better example). Unfortunately, that mastery is not present in the way Forever Evil really, really pushes the reader to like Luthor and understand that he’s complex and could possibly pass for a good guy every now and then. The inner dialogue about Luthor’s childhood gets tedious and its meagre attempt at thematic throughlines about his sister and that cat in a tree are all plain and ultimately uninteresting.

Luthor’s now a hybrid of Batman and Iron Man, between his insane competency, three-dimensions and suit of freakin’ power armour (and a quip made about the latter, and Luthor having everything except the helmet, seemed to pass off as Johns playfully acknowledging

Luthor’s similarities to Tony Stark’s trademark armour, but in practice just made me irritated and wonder why DC can’t come up with some new bloody ideas for once). That swings me to the fourth problem, hinted at in the second; there are no stakes. Like, at all. The world is taken over, yes, but there’s very little sight of that on page for me to care. Of course the Justice League aren’t dead, and of course they’ll be back by the end, but we only get a few brief flashes of a trashed Gotham and a few other ruined cities at the start and that’s about it. And no, before you tell me they explored all that better in side-stories or miniseries branded with the Forever Evil umbrella title, that doesn’t count. The core story has to stand on its own as a narrative and as a crossover, and relying on supplementary material solely to build tension is a cop-out.

And on cop-outs, we come to the fifth and final big problem on Forever Evil‘s CV: Dick Grayson. I want to disabuse anyone of the notion that my quarrel with how Nightwing was treated in this book has anything to do with my personal affection for the character

or some kind of fanboy disagreement or sense of entitlement as to how DC treats one of my favourites or any kind of crap like that. I want to make it absolutely clear that the capture, torture, quasi-death and go-off-on-a-secret-mission rigmarole Grayson suffers does almost nothing for the story and could have easily been excised without too much trouble. His imprisonment does raise emotional stakes for Batman a bit, and that weird little “We can kick ass together” thing Owlman tries to conscript him into is an interesting thread that’s never fully realised, but apart from that it’s a blatant shoehorning of the character into a scenario where they can launch into that new Grayson ongoing series they’re doing. Frankly, this stinks of someone at DC editorial – and one man in particular who, if you Google it, has a documented dislike of Grayson – deciding that rather than just address the narrative change in Grayson’s own series they would make sure Geoff Johns humiliatingly beats the crap, literally and figuratively, out of one of DC’s most fan-beloved characters. That’s probably the biggest slap in the face to me as a reader of DC and as a fan of Nightwing.

Wow. I didn’t think the book would make me this angry to write well over my usual word limit. Art is serviceable but uninteresting, handled by David Finch with workmanlike execution, and scripting is mediocre when it’s not outright boring. Sorry, art and dialogue are a bit perfunctory to my main concerns with the story.

Forever Evil was never going to light the world on fire, but combining word of mouth of its inherent much-betterness and the fact

that not much could eclipse Trinity War as overhyped and boring made me hopeful it could at least, just for a little bit, be an interesting book. In actuality, the interesting bits are the sequel hooks it leaves towards the end which I would love to see paid off later (especially that final-page reveal of the real Big Bad behind everything), but to get there took far too much slogging through a comic that was dull when it wasn’t offensive or trashy.

I do not, in any sense, recommend Forever Evil. It’s not a simple “you and him fight” story you can at least enjoy on a superficial level, it’s not a tense and high-stakes thrilling tale of survival, and it’s not an interrogative narrative or character study even though it pretends for much of the pagecount that it is one. The one big word that leaps to mind when I think of it is “waste”; Forever Evil was boring, crap, frustrating and infuriating in almost equal measure.

It’s another reminder that when it comes to the big event-type stuff, you’re better off with Marvel. At least they’ve got Thanos.

BEST QUOTE: [after freezing and shattering Johnny Quick’s leg] “You think that hurts? Wait until it thaws out.” – Captain Cold