I’m sorry again, guys. I can’t let you go another week without putting something up here. I’m still waiting on new comics to arrive in the mail, so it’s making updates difficult.

For now, I want you to check this book out. I reviewed it back in February for NetGalley, with the original piece up over at Goodreads right here. I’m reposting it on the Writer’s Multiverse because it’s almost certainly a contender for one of the 5 spots in my Worst Of for the year; consider it the comic book answer to Ride to Hell: Retribution.

One way or another, there will be a new review of a new book on a new Sunday that is new in the next new week. Until all that abject newness arrives, enjoy this gem originally published February 8, 2014.

This review is courtesy of an Advanced Review Copy through the good folks at NetGalley.

Ok. Give me a second to gather my thoughts here.

I get that zombie stories aren’t for everybody, especially since we live in a world where franchises like The Walking Dead are the catalysts for full-on undead saturation on television, within comics and in spin-off literature. The tropes surrounding stories about the living dead are well-worn and old-hand chestnuts, and as such we might be getting a bit bored with the whole effort.

So when a zombie story appears touting itself as something different, in much the same way Sheltered marketed itself as ‘pre-‘ rather than ‘post-‘ apocalyptic, I’m wary. Usually, this is a scenario where an undead tale is different the same way Zombieland differentiated itself from, say, 28 Days Later – where once there was gritty survival horror is now Woody Harrelson kicking undead teeth in with a banjo and a pair of hedge clippers. The broad strokes are similar, but the devil in the details sets it apart.

The Other Dead is most definitely apart from any other zombie narrative I have ever experienced; namely, since it’s a singularly stupid, aimless, convoluted-yet-childishly-simplistic and utterly ridiculous fictional venture. And that’s coming from someone who read Cry for Justice. 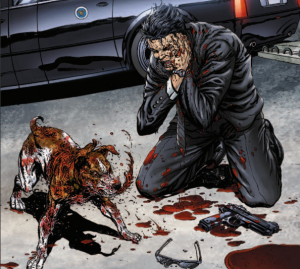 Ok, before I open with both barrels I should highlight that the idea of zombie animals rather than people is a neat concept, and while I’d be wary to carry an ongoing series on that idea alone it is interesting to see it explored. Granted, it’s nowhere near as exciting, nerve-wracking or sad as seeing humans, like the ones we live beside, becoming undead killing machines, but it’s still intriguing. And I will say, despite the utter bile I’ll dispense on it shortly, that the idea of the American President wading in and fighting flying zombie ducks is a pretty cool idea on its own.

Now that’s over with, let’s get to the remaining 95% of this dross.

First, characters. There aren’t any. Oh, there are certainly people walking around and spouting inane dialogue, but they aren’t characters. I’ve firmly got it in my head that the planet Earth we’re viewing is actually a simulacra populated by half-programmed robots, which is far more interesting than the reality The Other Dead presents.

Of the many drawling nonces on display we have Az – a wannabe occult fanatic who looks like Lobo from the DC ‘verse lost weight and diversified into being a punkish jerk without any of the badass appeal – his brother Tommy – a Littlest Cancer Patient who resembles the kind of ghost-child that Haley Joel Osment wishes he could’ve acted as back in the day – and Az’s girlfriend Jelinda-something-or-other – who apparently wants EVERYBODY to call her by her full, slightly-exotic name, probably for some kind of sexual gratification. There are others who are less protagonists than they are named Redshirts, but since they’re unceremoniously killed off at the drop of a hat after a meagre attempt at characterisation they’re not worth mentioning.

Oh, and also President Freakin’ Obama is in this as a much fuller-haired, common-sense-impaired world leader who hits upon the world-beating idea of taking a trip to Louisiana to check out this zombie business. Because, y’know, not like he’s going to be needed for more important stuff in the White House, and nor is it necessary for him to take the Secret Service or any kind of protection besides a meek little advisor guy named Chip who’s apparently a dab hand at making sandwiches.

Now, all of the above sounds like it should be the opening act of a hilarious, camp and over-the-top parody with all these disparate elements thrown up against a Southern monsoon and a legion of undead crocodiles. Indeed, if this had been the book’s gameplan and the tone it had shot for I probably would’ve been kinder. One of the many, many problems plaguing The Other Dead, however, is it’s trying its damnedest to be taken seriously when it most certainly cannot be.

None of the characters are the least bit relatable, interesting or engaging. We’re asked to feel sad when the aforementioned Redshirts are gored and thrown around by the aforementioned crocodiles, but we know nothing about them to have any emotional connection warranting 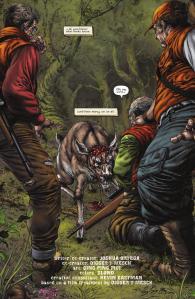 such a reaction. If they were actual Redshirts, similar to the one-shot characters Walking Dead routinely kills off right after introducing, it’d be different, but The Other Dead takes a brief stab at fleshing out these guys and girls pages before death so that their passing carries some kind of impact. Suffice to say, it don’t.

Neither do we give two hoots about our protagonists who, as stated above, spout inane dialogue that feels like it was scribed by the translators of Backstroke of the West. As well as the usual cliches of “What are we going to do?”, “I’m just glad you’re ok” and “Aren’t you responsible for starting this apocalypse because you and your friends did that blood ritual in the backyard last night?”, we also have curse words aplenty and deployed for no reason. “Shit” seems to be the word of the day and used, I gather, to try and add to the edgy, adult atmosphere the book is shooting for. There is such a thing as overdoing swearing, and The Other Dead kinda bypasses that stage to just make it tedious and repetitive.

What’s that, I haven’t covered the plot? Probably because it’s a zombie apocalypse – there’s only so much you can innovate in that regard, even with the reanimated corpses of squirrels as antagonists. They attack, people scream and die, rinse and repeat.

Now, I was thinking of maybe giving the book a pass at two stars and leaving it there. My immediate thought of going to one star by default seemed a little cruel, especially since it’s clear the book is at least, however meekly, trying something different from the norm. And realistically, I don’t want to say all these things to sound nasty or vitriolic. It is, after all, still a first volume, so maybe it’s just finding its feet, right?

But then we reach the end of the book, where I should probably put up a SPOILER WARNING before proceeding.

So our characters leave the relative safety of their house and get caught in the monsoon for reasons that are utterly asinine and don’t bear examination, when they’re rescued by a local wannabe Confederate – with an obvious grudge against Obama – who brings them into his survival shelter as a pack of killer zombie deer gather outside. While recuperating we’re treated to some truly awful dialogue even by the book’s standards – including such gems as the Confederate declaring Obama to be an even worse threat than said deer, because Obama wants this blokes’s guns and POLITICAL STATEMENT YOU GUYS – and end on a shot of Obama, his new Confederate frenemy and our other heroes heating up and getting ready to take on those deer with assault rifles. Quoth Obama, “I only said [guns] should be properly regulated…I never said I couldn’t shoot one.” 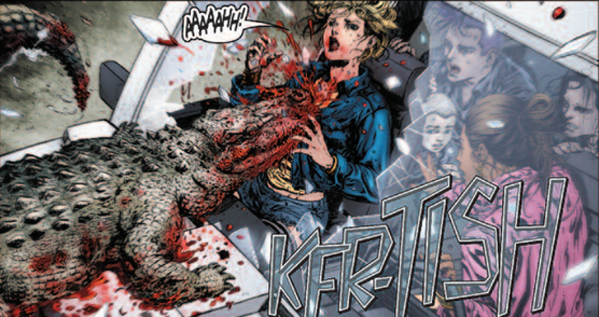 At that point, I just went “Nope. Nope. Sorry. Nope.” Out loud. That’s how ridiculous it was. One star for you, Other Dead. What tiny shred of credibility you had with me just got eaten by those deer.

Like I said, if it was trying to be a parody I could definitely roll with that. It has the kind of meta-ingredients and overuse of certain tropes that a master like John Scalzi or Yahtzee Croshaw could work well with to form something funny and off-beat that takes jabs at the genre’s source material. The problem is that there are almost no intentional laughs to be found in this dreck, and if they actually are intended to be funny they could do a better job of telegraphing that. 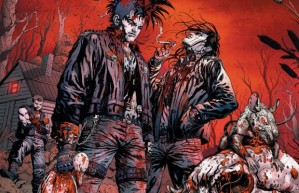 The serious moments that a good drama would use for character development come off as laughable, especially since we don’t know enough about these two-dimensional human sandwich boards to give a crap about what’s happening to them. The facepalmingly awful humourous bits that are intentionally included come off as both forced and as unfunny as one can get without hiring Adam Sandler for writing duties. The political jabs at Obama or his detractors – since it’s impossible to tell which side the author is on in that regard – fall flat because they’re heavy-handed and at the same time targetless. Is the point of mocking Stephen Colbert in the middle of a zombie animal apocalypse because the author genuinely finds him tiresome, or does the quick defence of the talk show host by one of the characters as being “ironic” indicate the author’s a voice of reason against those who think Colbert’s pretty terrible?

I’d say clarity of purpose is the only thing that could potentially save The Other Dead, since there’s no way its one-trick-pony new idea (which probably isn’t even that new, if one could be bothered to research other stories with undead animals) can carry it as anything other than a memorable and slightly innovative trainwreck. The Other Dead was a slow experience, which is surprising given the brevity of the ARC, that rather than following its arc to a crescendo of action and character drama is instead on a determined one-way trip straight to the discard pile. 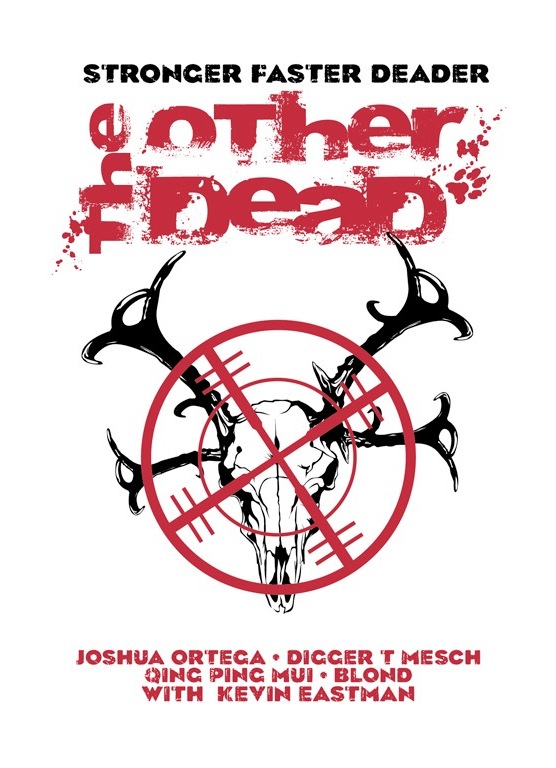 BEST QUOTE: No, sorry, nothing in this piece of dreck is even so-bad-it’s-good funny enough to wash out the horrific taste of the rest of it. It’s that bad.