You know the old adage, “When God closes a door, he opens a window”? I feel a similar one right now: when Ed Brubaker ends a Fatale, he starts up a Velvet.

I’d almost go so far as to say Brubaker’s work at Image far outstrips his impressive Marvel repertoire, which includes the definitive take on Captain America in the whole Winter Soldier/Death of Cap plotline that recently made a bajillion-and-one dollars at the box office as a kickass movie. That is one tough-ass act to follow, but it’s a feat Brubaker’s managed to undertake. That’s like George R.R. Martin finishing Game of Thrones and following it up with a series of kids’ books about a flying dinosaur, and having the latter make the former look poor in comparison. (and now I really want Martin to write a series of kids’ books about a flying dinosaur, because it would be awesome)

So as Fatale begins winding down, let’s look at something completely different with Velvet. It’s about a strong-willed black-haired woman with a dark and troubled past who’s something of a mankiller for almost every male she engages in a relationship with. Also her past is connected to some present-day shenanigans involving a dense, labyrinthine conspiracy and a whole lot of sex.

Ok, maybe not completely different to Fatale, then. 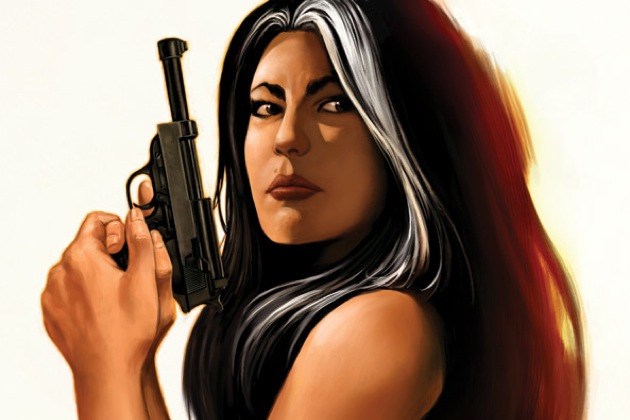 Velvet Templeton, title character of the piece, is a milquetoast secretary at a secret agency that saves the world a lot. When one of her former conquests, a secret agent man who makes James Bond look like a boy scout, ends up dead, it starts a chain of events that blows the lid on Velvet’s hidden past as a secret agent who herself makes Black Widow look like a girl scout (sorry, I couldn’t think of a different reference point). Also there’s a lot of martial artistry, several dead bodies and multiple cigarettes; as in, multiple cigarettes appear in the story, not necessarily just with the dead bodies.

Before I get into the two things I didn’t like about Velvet, let me state unequivocally that it is definitely worth your time. It’s a tight, well-plotted, action-packed and gorgeously rendered story that has all the hallmarks of being another Brubaker classic in the vein of Incognito or Criminal, and I’m definitely keen to see where it goes next. What waters my enthusiasm at the outset is that, essentially, Velvet is a supernaturally-bereft retelling of Fatale. 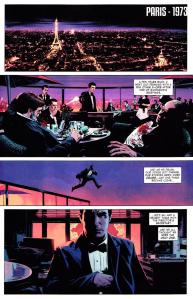 What do I mean by that? Just look at the third paragraph of this review; Velvet is, for all intents and purposes, as stolid, beautiful and lethal to unwary male folk as Josephine and her cavalcade of man-cadavers. She’s a woman in a setting where women aren’t generally respected, has a dark and troubled past that comes back to bite her despite several attempts to evade it, has hidden abilities we learn later are connected to said past, and is ambiguously an anti-hero at best. For extra points, she even has black hair, and no, the white streak she ripped off from Rogue of the X-Men doesn’t entirely help to distinguish her.

Differences between the two books are subtle, largely stemming from a distinct lack of the Lovecraft-inspired mythology that frames Fatale. In contrast, Velvet firmly roots itself in a Roger Moore-era James Bond feel with the darker, brutal execution of the Daniel Craig movies. Granted, both women also note the easiness with which sex can be used to corrupt and manipulate men, but through separate influences; Josephine seemed to be unwilling to, whilst Velvet has no scruples about screwing.

Since Velvet feels quite similar to Fatale, that also means I don’t really care about Velvet as a protagonist. I was always far more interested in Josephine’s lovers and those around her than Josephine herself, with the bulk of Fatale‘s appeal being the unaware victims caught in her influential net. Here I find myself less engaged with Velvet’s struggle to clear her name and root out the conspiracy about her than I am with her erstwhile partner Burke, or the European lady married to an asshat General, or even Velvet’s bosses as they plan her capture. Velvet herself is something of a cipher with flickers of personality; so far, all I’ve seen her do is kick a lot of ass and bemoan her current fate as Public Enemy #1. Also granted, her character receives a bit of life during the book’s closing chapter when a somewhat-significant twist is revealed, but even then it’s hard to feel as much impact as Brubaker clearly wants the reader to experience.

I get that it’s hard to write anti-heroes with personality when those characters are tough, hardened badasses, and while it’s relatively easy to pull off those protagonists on screen (with examples like Breaking Bad and the aforementioned James Bond coming to mind) it’s a bit harder in a literary work that relies on directly getting into the character’s head and feeling some kind of empathy, if not sympathy. All I see in Velvet’s head is tactical application, thoughts on how to kill a man quickly, bemoanings of how annoying life has suddenly become now men with larger guns are trying to kill her. There’s not so much a character as there is a lens for the plot, and that’s something Velvet needs to address in future if it hopes to pull off ending twists again with any kind of lasting impact.

But despite all that, I did say the book is good. The plot itself is tightly written and moves at a swift pace, but not so fast that it gets disorienting. Artist Steve Epting, longtime collaborator with Brubaker on quite a bit of his Captain America run, is in exceptional 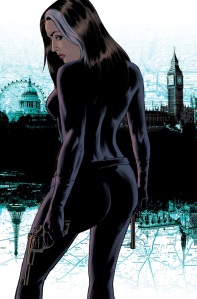 form, using a dark, grimy palette that fits the setting marvelously but is still pop-off-the-page engaging. I do think Velvet’s face occasionally takes on an overtly-masculine quality (especially on the front cover, where I did initially mistake her for a cross-dresser – come on, just look at that jaw!) but overall it looks fantastic.

Dialogue is Brubaker-standard, which is the same as Morrison-standard, Hickman-standard and Whedon-standard in that it’s exceptional for the author who’s writing it. It’s clipped in places for short, sharp conversations, with quips used brevitously and character being conveyed excellently. As I said above, I really like Velvet’s companion Burke; just give me all the gritty, grizzled, chain-smoking British killers in a story and that’ll make me happy, it seems.

While I can definitely recommend Velvet to discerning Image readers, it comes with the kind of asterisk I apply to works like Lazarus and East of West: the greater successes or failures will be determined by the way going forward. It’s not awful by any stretch, but it definitely has concerns it needs to address in subsequent volumes to get the desired reaction. While I am all for having strong, kickass female leads in my comics, it helps if I can see them as a person rather than a killer of men in a nice dress. 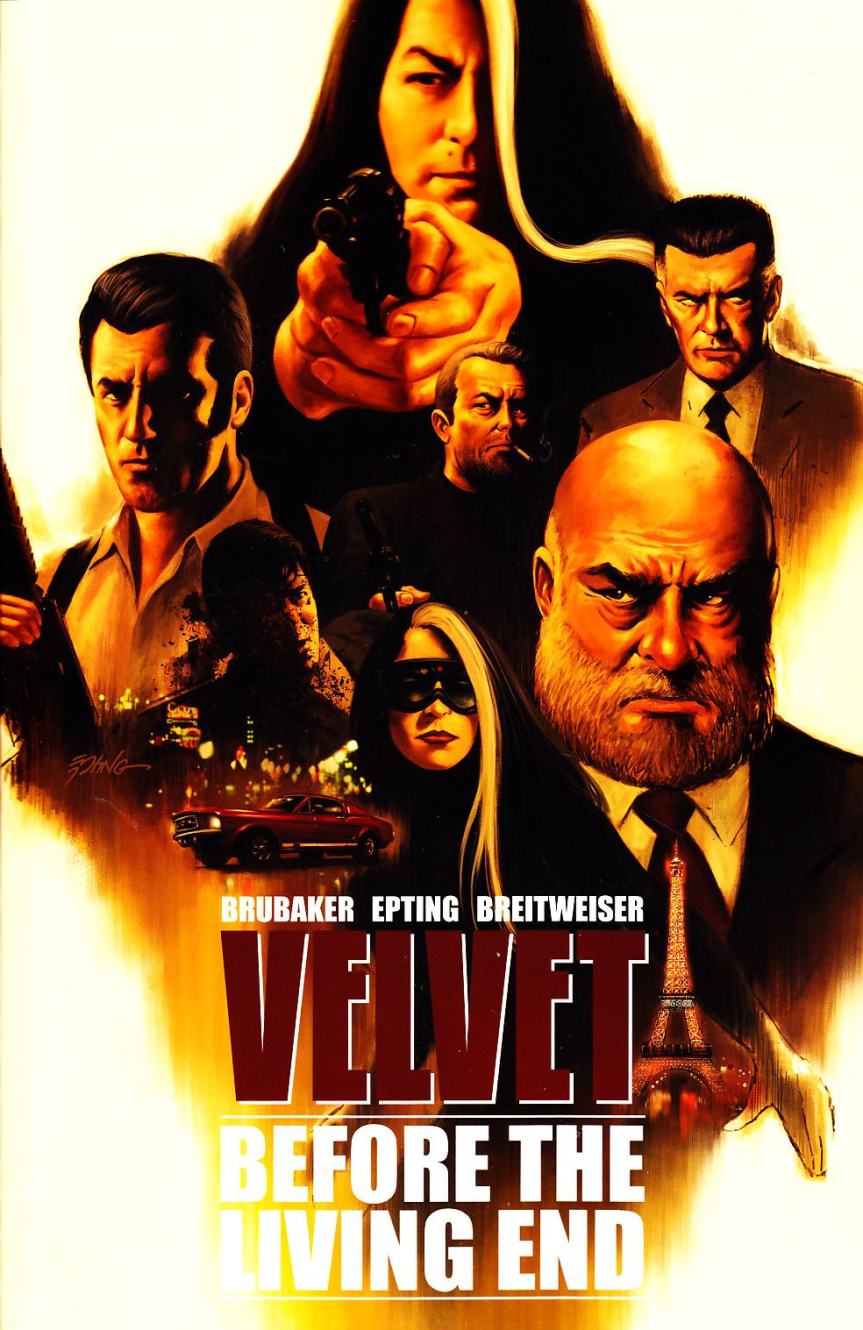 BEST QUOTE: “I came to a few seconds after the crash, and she was the first thing I saw… your Miss Templeton. And maybe it’s just my damaged ego talking…but it actually seemed like she was enjoying herself.” – Sgt. Roberts