“We call it a day, then. Back off, and pretend this never happened.”

The above quote, from the penultimate page of X-Men: No More Humans, says everything I could possibly say in a whole review, succinctly boiled down to one indelible sentence.

If there ever were a superhero franchise hit hard by too many event titles, it’s the X-Men. They got bitch-slapped by the clusterfluffs of Avengers vs. X-Men, Schism, Age of Ultron and Battle of the Atom. (the latter of which, despite having not read myself, has been described to me as worse than broken needle acupuncture.) It’s just never been the same for them since. At some point during that cavalcade of status quo shifts, maybe something broke. A gear lever snapped from its box, or a cog fell out of the wrong place. Because ever since then, I feel it’s just misstepped more often than a caffeine addict on a tightrope.

Sure, we got the anti-hero-but-maybe-villain-centred Uncanny X-Men as a breath of fresh, salty, Bendis-penned air. We were also slapped with its sister series All-New X-Men which, despite the pleas of several readers who claim that “No, really, it got better later!”, I have no interest in returning to unless accompanied by a litre bottle of Captain Morgan and a hunting knife. And don’t get me started on the plain ol’ mediocrities of the new Uncanny X-Force and A + X. Point is, the X-Men have kind of gone the way that the latter-day Justice League books have traveled; once great, going nowhere, and probably only worth purchasing if your canary’s cage needs a poop-liner.

So consider the onus No More Humans had before it even left the gate. Penned by Mike Carey – sterling writer of The Unwritten – and illustrated by Salvador Larroca – artist behind Matt Fraction’s landmark Invincible Iron Man run. Set within current canon, mostly disregarding the stupider elements of Brian Bendis’s current “X-Men from the past” crap, and with a story that features a role-reversal of the impactful “no more mutants” premise that ended House of M almost a decade ago. For bonus points, it’s a story told from start-to-finish in an OGN (Original Graphic Novel) format, meaning the flow isn’t interrupted every twenty pages for a story collected from half-a-dozen single issues.

The ingredients were all there for something truly excellent, that could make me give a toss about Marvel’s mutantkind again. Instead, to use a horrible pun, No More Humans tells me I should read “no more X-Men” for the foreseeable future.

Yeah, I just read that again. Wasn’t any less lame the second time.

The story presents a world suddenly devoid of humans, leaving only mutants behind. There’s a distinct influence from FlashForward, of all things, in the opening scenes where planes being flown by humans, cars being driven by humans and buildings being inhabited by humans all happen to crash, pile-up and become abandoned, respectively. 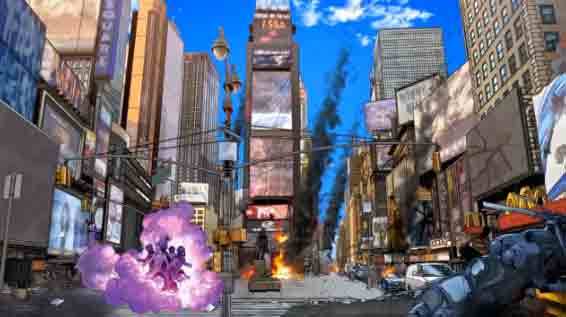 I admit, the early pages had me intrigued; for the longest time the X-Men have dealt with oppression at the hands of those homo sapiens idiots, so why not see if they can claim the Earth as their own? We could be faced with a narrative challenging the core ideas behind natural selection, survival of the fittest, and see a changed world inherited by those whom we’ve marginalised for decades. Ideologies could fracture and give rise to nations born from the several hundred people left standing on our soil. Carey and Larroca had the chance to tell a story that fundamentally interrogates the concepts behind both the X-Men and real-world assumed superiority of humans as the dominant species.

Notice the operative word at the beginning of that last sentence is “had”. Instead, we have a teaspoon-shallow plot about the son of Wolverine and Mystique (maybe? Still fuzzy on that count) removing the humans so he can turn the world into a multiversal way-station for mutants from other universes. Also there’s a lot of fighting, because superhero comics, amirite?

No More Humans is not just a bad book, it’s a disappointing one. The premise is so rich with narrative potential that I was dubious 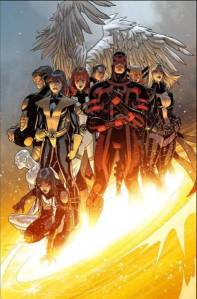 the idea would hold water in the Spartan space of a 160 page hardcover. It’s the kind of idea I’d love to have seen fully unpacked over a few books, or maybe an ongoing in a separate universe like what the Ultimates Comics line does. As it is, not even half of the ideas I’ve just opined are even hinted at, let along explored in any great detail, and we’re more concerned with a bunch of techno-babble, a zombie scientist and the aforementioned Wolvie-Mystie son getting aggro. It’s kind of like opening up Giorgio Agamben’s State of Exception and finding a bunch of mad libs instead of the dense material you were hoping for.

Like Avengers: Endless Wartime before it, the story doesn’t make anything good out of the OGN format. As is, the narrative could’ve managed to be told in 2 single issues. It’s got less of a film-in-a-book feel than what Endless Wartime had, but in exchange it just meanders and doesn’t delve as deeply as it could’ve.

The shallow execution isn’t helped by dialogue that’s just plain when it’s not just plain bad; the best quote at the bottom was literally the only slightly-funny quip I read that didn’t make my palm slap my forehead. This doesn’t really feel like it’s Mike Carey’s writing at all, come to think of it. His work on The Unwritten is fantastic, and characters have distinct voices with his words put to page. Everyone here feels flimsy, ill-defined and overly-reliant on character work that other writers have done better. Wolverine growls, Cyclops sounds prudish, Beast is the resident tech guy and speaks in that lingo, etc. Nothing remarkable, and especially disappointing coming from a writer of Carey’s caliber.

To add insult to injury, Salvador Larroca’s artwork is equally tepid. Let me just state unequivocably that his Iron Man work was bloody gorgeous; rich tones, great use of shadows, facial expressions masterfully executed, and colours leaping off the page when needed to. His work on No More Humans almost feels like something a computerised artwork production program might make, and is a far cry from the expressive work I’ve seen previously. Colours are just there. Character faces are bland, uninteresting and uninspired. Action scenes are overly cluttered. Everyone’s either frowning, grimacing or (in the main villain’s case) creepy smiling. It’s standard, unengaging and lacklustre.

But, dear readers, all these previously mentioned faults pale in comparison to the colossal one No More Humans makes at its conclusion. At this point I shall issue a SPOILER WARNING for anyone brave enough to have made it this far through my vitriolic deconstruction.

Remember that quote at the start of this review? That seems to have been the unconsciously-held mission statement that Carey and Larroca subscribed to when writing this book. Why I say so? Because, during the final overly-complicated dust-up between our X-Heroes and X-Villains, the ultimate deus ex machina is played.

The Phoenix shows up. Yes, that Phoenix, the one that made Jean Grey go all kooky and homicidal. Oh wait, sorry, it’s a Phoenix from another universe. And it literally retcons everything that’s happened in the story so far, restores the humans to the Earth and returns each mutant from another universe to their home. There’s also a point explicitly made by the characters that, since the humans will be restored to the physical place they were when they were taken, those thousands who were in planes that have fallen from the sky or driving cars that have crashed will appear in mid-air or inside twenty-car pile-ups, respectively. What little impact this may have had is removed when the Phoenix basically says “Pffft, please. The laws of physics are my bitch,” right before restoring all to life with no ill effects.

Yeah, I’m with you Wolverine. Let’s just pretend this story never happened, because clearly the writer, the artist and the editorial team are intent on doing so.

BEST QUOTE: “Let me surf this non-digital interface and I’ll retrieve that information for you before you can recite the complete works of Shakespeare.” – Beast