This is what we came to see. 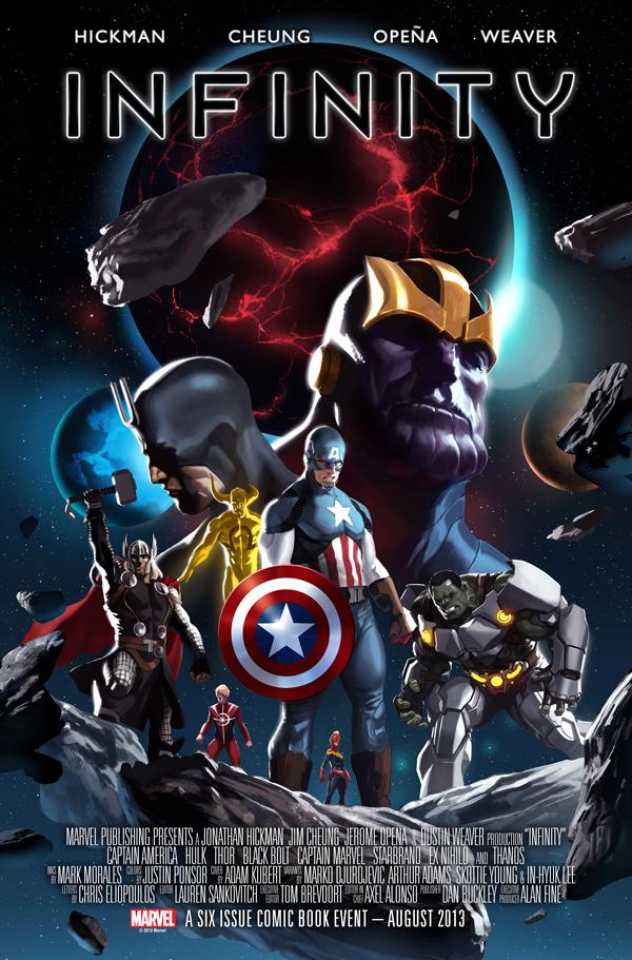 Early in Infinity‘s promotional run, the movie poster image above did the rounds for the book. Promises and inferences were made about the story’s game-changing nature, the linking of threads from all of Jonathan Hickman’s previous Avengers work, and a climactic showdown with the alien enemies known as the Builders whilst longtime baddie Thanos makes a power play for Earth in the background. We were offered something big, from a writer I know is capable of giving us something big, then bigger on top of that.

You know what? Infinity – and its vanilla Avengers component – delivers. It is the 30-minutes-or-less pizza guy who not only gives you the greatest slice of meatlovers you’ve had in your life, but also hands you a spare garlic bread and some of those chocolate-filled mudcake pudding things for good measure. And now I’ve made myself hungry.

In a nutshell, the main thrust of Infinity deals with Captain America doing some Avenger assembling and heading off into deep space to spearhead the Builders before they come to Earth and blow us all

up with the bureaucratic airs one might expect of a Vogon Constructor Fleet. An armada of starships large enough to rival anything Star Trek: Deep Space Nine could put on screen amasses and takes the fight to the Builders.

That’s it. That’s the story. But dammit if it isn’t entertaining.

Ok, maybe I’m not being entirely fair; this is a Jonathan Hickman book, so of course it’s not as simplistic as the above summation might indicate. There’s metaphysical contemplation of life and death, mostly from resident pontificator-cum-Avenger Ex Nihilo. There are enough continuity-driven appearances by Marvel’s space-faring species that you’d almost think Hickman’s read every intergalactic comic penned in the past half-century. There’s witty and depressing banter amongst characters where appropriate that feels like actual spoken dialogue. 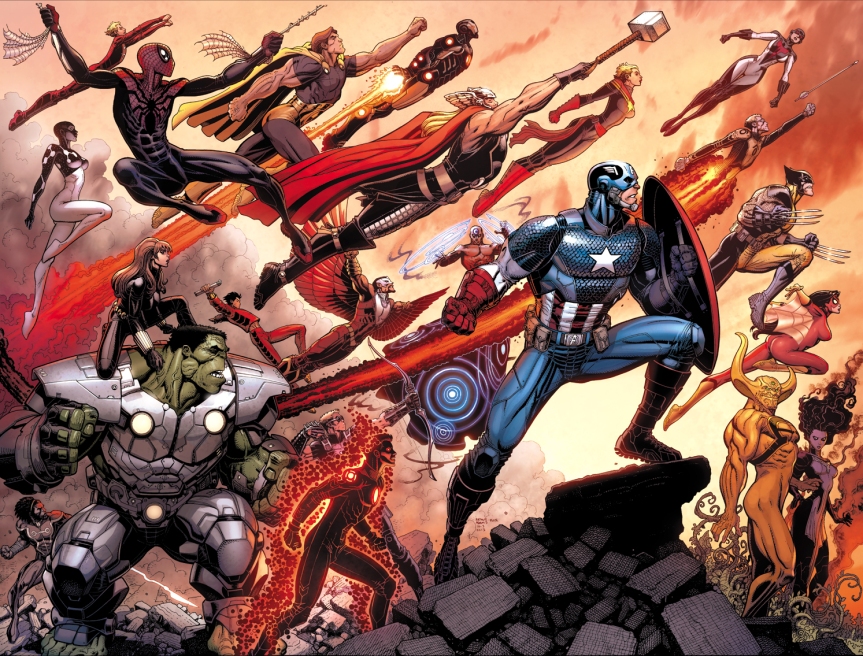 It’s actually kinda hard, reading in the collected edition, to distinguish between which chapters were Avengers issues and which were Infinity-branded, as there aren’t any indicators to either effect (New Avengers is easier to delineate due to its Earth-bound story). For the purposes of this review just assume I’m talking about all the Infinity stuff that doesn’t relate to Thanos (see here for the rest of that). If the Mad Titan himself felt incongruous to the story, the remaining two thirds fit so well together it reinforces my notion that maybe two events would’ve done better justice to Hickman’s story than just one.

Taking the space opera portions of Infinity on their own, you need to come into it with a reader’s mind galvanised either by paying attention or switching off. What I mean is that you can read about Cap Rogers in the 21st Century and his Blake’s 7 team of adventurers with either an eye for the finer details, the grander tapestry being woven by Hickman and all the neat little references to previous cosmic Marvel tales, or you can read it with an almost Michael Bay sense of 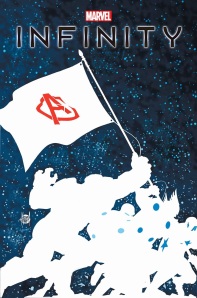 “WHOOOO I GET TO WATCH SH*T EXPLODE!!” Far be it from me to recommend the latter in almost any other case, and I certainly mean no disrespect to Hickman when I compare him to the disastrous architect behind Transformers‘s downfall, but this really is a tale you can take in two different tellings. Myself, I always strive to be as pretentious as possible when attributing a finer eye to mediums usually designated as “low-brow”, so I read Infinity as an intricate parade of moving parts that just happen to take place during a space battle and came out significantly pleased with the overall result. It also made me really want to watch Star Wars again.

As an event title, the space chapters of Infinity fulfil my criteria masterfully. There’s a clear threat necessitating the Avengers call their entire ensemble to the task, the prolific cast each get a chance to

shine in their own little moments, and to jump ahead in my usual review structure a few portions, the dialogue is great. The sense of joy at victory and weary resignation following defeat are all palpable in the characters’ words and actions, which really contributes (especially towards the end) to the overall Pyrrhic Victory sense the book strives to achieve. I won’t say whether or not that particular ending is in store for you, though if you honestly believe Infinity ends with Earth destroyed you’ve clearly never read a superhero event. I will, though, say Infinity‘s conclusion left me satisfied, which is still more than Fear Itself can claim to have done (and unlike that shambolic excuse for an event, the conclusion didn’t rely on a major character death or two to get readers invested, which can only be a point in its favour while I keep throwing bits of burning newspaper at those who thought the death of Thor was a great way to cap that stupid affair off).

Art’s good, if a little schizophrenic. Like Avengers vs. X-Men before it, the rotating team of artists aren’t always congruous to each other’s styles, and at times the stark difference in portrayal of characters can be a little jarring going from chapter to chapter. The bulk of it is the full-lipped stuff I’d expect of a major reader-drawing event title (thank God Filipe Andrade wasn’t onboard for this), and for the most part is serviceable, flashy and big. I’d love to get technical about it, but seriously, the space battles look freakin’ sweet. You’d owe it to yourself to check out Infinity on that basis alone, which is a visual recommendation I rarely give without irony.

If I’ve got a gripe with the story, though, it’s that as an event it’s almost entirely inaccessible to newbies unless you go in with the Michael Bay mindset. Disregarding the foreshadowing provided by Hickman’s books leading up to this, the amount of referencing to other Marvel stories (going as far back as the 60s) is insane. Now, I’ve read a ton of Marvel across several eras’ worth of history, and even with my (not really) vast and (totally not) encyclopedic knowledge of the canon I was having trouble following some of the early stuff involving races with apparent grudges and history with each other getting into an intergalactic pissing contest. I also wasn’t quite sure how Captain America had managed to ingratiate himself as well as he did with this apparent space council of continuity, therefore having to rely on the old ‘it’s a thing, don’t question it’ mentality when presented by unexplained elements in superhero comics. Maybe he brainwashed the council to allow humans onboard off-page, or one of the council members saw his costume and really liked the colour scheme.

All things considered, Infinity works really well as an event title, as a story in its own right and as a continuation of Hickman’s Avengers opus. Whether you’re a fan of complex storytelling, deep character pathos and gorgeous artwork, or if you just want to see pretty spaceships blow up, you can’t ask for much more than that.

Scores and best quote given in INFINITY: CORE MINISERIES review