Ok, I swear this is the last one. I aim for variety and even this is getting ridiculous. If I could count the number of times I’ve ripped into Brian Bendis this on my hands I’d resemble something out of a Goosebumps novel.

It seems Bendis is returning to his roots somewhat by delving into the street-level superhero that really made his bones at Marvel back in the early 2000s. Utilising an end-of-an-era feel that’s strongly reminiscent of Batman’s The Dark Knight Returns, Bendis gives us End of Days – the bland, overhyped and overly-colourful conclusion to a superhero saga that renders the entirety of what came before it completely meaningless and-

Wait. Hold on. You mean, it’s not bland? It actually has a story?

And it treats the characters and mythos with respect? And it’s a call-back to the glory days of Bendis’ writing style by focussing on a narrative that doesn’t involve a galaxy-level threat and tons of Wolverine fanservice? And it uses writers and artists from previous Daredevil runs as a kind of last hurrah for some of the character’s most seminal books?

Seriously, either stick to doing schlocky, overblown pieces of garbage or keep writing fantastic, thought-provoking and memorable instant classics that focus on narratives that kick ass. You can’t have it both ways.

Brian Bendis’ writing can best be described as like the American Congress, with crappy stories to the Right and truly excellent yarns to the Left. End of Days falls squarely into the latter category; after Daredevil dies in a climactic confrontation with a villain who doesn’t have a lousy name that reflects the old comic school of thought from the 80s that works as hard as it can to rip off Batman at every turn, intrepid reporter Ben Urich takes it upon himself to investigate his death and the enigma of his last words. The story that follows is a continuity cavalcade featuring appearances from almost anyone who graced the pages of Daredevil’s series, and the book itself is built by Bendis and a slew of old writers and artists from the Hornhead’s prior runs.

I will say this review is a tad biased because it’s Bendis writing Daredevil again. I haven’t really done a review on his run before but suffice it to say that the three Ultimate Collections of his run are so, so worth the money. Bendis took the character to hitherto unseen places and pushed the envelope in ways not seen since Frank Miller’s Daredevil: Born Again back in the 80s. It was subversive, gut-wrenching, harrowing story with very little light at the end of its tunnel but with a solid premise and excellent character work throughout. Go read it. Seriously, I know I keep saying that about books I happen to be partial to, but the original Brian Bendis Daredevil run is worthy of your attention.

As is End of Days. Bendis fully abandons the bravado and Buck Rogers qualities of his recent works such as Age of Ultron and All-New X-Men and goes back to the grounded, gunmetal feel of a life-on-the-street superhero and the sins he commits in the name of

security. Urich, too, works well as the book’s protagonist, and is still one of the best well-rounded journalistic characters I’ve seen in any medium since Will McAvoy took the desk in The Newsroom.

That said, this book is of no use to you if you’re not even a tad familiar with Daredevil’s curriculum vitae. Even people who’ve checked out Mark Waid’s recent run will get something out of it, albeit not as much as if you’ve read Miller, Bendis, Brubaker and Diggle in particular. This is a story written by and for devout fans, people who’ve experienced Daredevil’s trials and tribulations for the longest time. There’s quite a lot of reference to multiple past events that aren’t elaborated on for neophytes, so don’t pick this up expecting a gateway entry to Daredevil’s universe. I ‘spose the whole End of Days title is a bit of a giveaway that this isn’t a beginning.

As I said, the story crips heavily off the themes and styles of The Dark Knight Returns, but manages a great balancing act between emulating that story and treading new ground of its own. It helps that the hero’s already dead, rather than Returns‘ use of a geriatric Batman as the narrative’s protagonist. By focussing on the aftermath, and on those caught in the blast radius of Daredevil’s death, End of Days gives us something with a very unique flavour and poses a bunch of questions that strike right at the heart of any superheroic pathos. I won’t give you the full rundown since most of my spartan readers probably aren’t interested in reading me pontificating for several thousand words, but suffice it to say the book manages to not only represent the truly excellent side of a superhero character, and the many great deeds they do which are seen as mighty when reflecting on their death, but also challenges the very nature of those characters. Little things like the tired nature of the Avengers as a brand, the many former villains and bystanders who question the hows and whys of characters like Daredevil, they all come together to really poke holes while flying the flag at full and glorious mast. 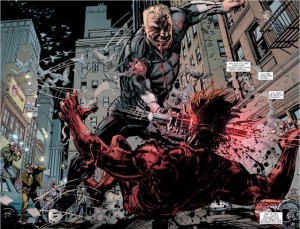 Artwork is brilliant. I’ve got a soft spot for the grungy, dirty style of Alex Maleev and Klaus Janson, and with the abstract paints of David Mack and further assistance by Bill Sienkiewicz the story is brought vividly and darkly to life in a way that esoteric, full-lipped art just can’t match. I love some of the pop art styles being utilised in Waid’s current run by artists like Paolo Rivera and Chris Samnee, but sometimes it’s great to read a down-in-the-dirt story with some appropriately down-in-the-dirt artwork. It’s less a lovely bouquet of roses and more a punch in the teeth, and it’s the only time I wouldn’t mind being punched in the gut. Mostly since it doesn’t require a dentist’s tools afterwards.

Dialogue is not quite at the conversational, organic level Bendis achieved in the oft-referenced examples like Dark Avengers and Siege, but it’s still decent. The dynamic between Urich and his son is well-written, and the references and explorations of past events through Urich’s interviews with Daredevil’s old cohorts is written in a style that seems true to the characters. As I said, a lot of it is going to fly over the head of anyone not the least bit familiar with Daredevil canon, but for those of us who’ve been in the long haul there’s a bunch of tiny and well-chosen eater eggs peppered throughout.

End of Days may not end up being the perfect end to Daredevil’s career, and I’m sure there are those in the fan community who hate Bendis for concretely spelling out Matt Murdock’s final fate (since he has claimed, emphatically, that this book is indeed canon). It’s not sunshine and flowers in the end, but that’s never what Daredevil’s been about. His end is fitting, a death on the street in defence of innocents, and his legacy ensures that the implicit mission he started in Hell’s Kitchen will never be left without someone to finish it. I loved End of Days not just because it got the old writer/artist team of Bendis/Maleev together again, but also because it was a fitting cap to a superhero career that’s ebbed and flowed in terms of Murdock’s victories and defeats. It’s reflective, introspective and, ultimately, a little hopeful.

Sorry, got a bit too serious there. Coming next week: Chris reviews a Superman book through hilarious interpretive dance! 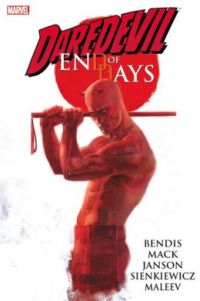 BEST QUOTE: “You made a deal with the feds. You made no deal with me.” – Daredevil