As the auteur-driven creator behind post-modern odysseys like Pax Romana, Red Mass for Mars and The Nightly News, the man is a single-purpose writer. His goal: give you something that’s really off the beaten track.

While it’s true that his Marvel work is something different to the norm and well worth reading, his creator-owned pieces are another level entirely. A bunch of futuristic soldiers going back to Ancient Rome to change the course of future Christianity? An aesop regarding the follies of transhumanism that will lead to our race being subjugated by super-intelligent apes? A time-travel yarn about a dude fighting a war that started because time travel started a fight after time travel was started due to time travel starting before the other time travel began? Great stuff, even if it gives you a brain hemorrhage afterwards.

Ok, I’m not doing justice to the plot outlines above and they do sound like rip-offs of previously existing movies. It’s more what’s at the core of a Jonathan Hickman story that makes it unique. The art is usually gritty, abstract or both, the characters are anti-heroes at best and there’s rarely a completely happy ending – pyrrhic is the best you can hope for. More importantly, each issue has this tendency of building up joyous dread in you as you read, knowing that it can only go more downhill from here until you reach the end and it all spills out in a giant wave of anxious train-wreck tableau.

That’s a tendency that Volume 2 of Manhattan Projects runs with. Each new chapter of the alternate universe World War II all-star science brigade keeps building that awful, wonderful feeling in your gut that the protagonists are building towards a really, truly bad ending one day. It begins with a poor former Nazi getting his forehead cattle-branded with a swastika in a manner that’d make Aldo Raine proud, and after the guy shows he’s a lot more resentful of his Nazi-ness than most of the Third Reich he gets literally kicked in the face by his former superior, lied to repeatedly about receiving his freedom and has his brain hooked up to an energy vortex that can only be activated by sapping his life force over a period of years.

It only goes downhill from there. And it’s glorious.

I checked out Volume 1 of Manhattan Projects during my summer roundup of indie titles and found it jolly enjoyable, but it was missing a little bit of connective tissue to transform it into a story rather than a series of somewhat-related vignettes. This is a

The reason I say it’s glorious to watch as the snowball of unfortunate events grows ever larger is because most, if not all, of the main characters are complete asshats. Sure, it’s cool to root for the villain sometimes and watch as they plan world domination of all the hapless plebs crawling across the Earth, but when you’ve got protagonists including an alternate-universe axe crazy Albert Einstein, a vapid and self-obssessed representation of Richard Feynman and a multiple personality cannibal naming himself Oppenheimer then you’re not exactly in for a bunch of characters worth sympathising with. 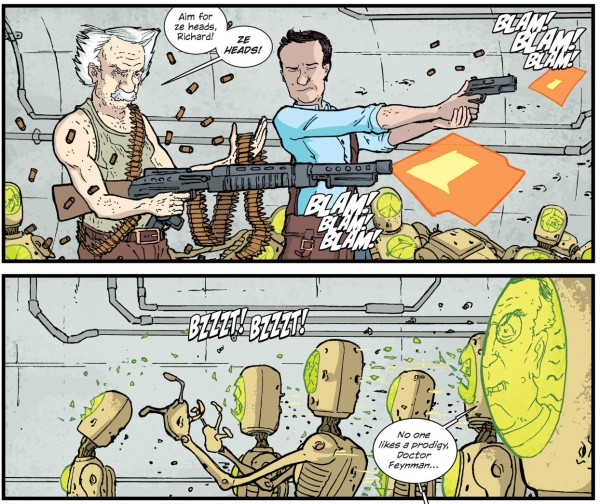 The thing Hickman does really well with Manhattan Projects is striking a balance between amoral thuggery and somewhat relatable anti-villainy when it comes to his protagonists, making them clearly on either the black or grey end of the scales but also giving them just enough of the other stuff for the reader to stay invested. That is, they’re not so evil that they’re off-putting as main characters. While it is satisfying to watch as things go exceedingly pear-shaped for everybody in the book’s second half, it’s equally great seeing the resolution to that in a way that’s not dissimilar to when someone like the Punisher (as bleak an anti-hero as you can get) securing a victory against someone like the Kingpin (even bleaker). The end result is a delicious nasty slice of anti-villain pie, bordering on a guilty pleasure as we unconsciously root for the bad guys to win. Or consciously, in my case, but then again I’m probably going to end up in an insane asylum before I’m thirty.

The artwork by Nick Pitarra kicks ass, and not just in the part where the aforementioned kinda-nice Nazi is getting a foot planted in his tuchus. there’s quite a bit of definition in the facial work, with thick lines of articulation along the lines of Frank Quitely and Chris Burnham, and there’s fantastic use of single-colour shades used for flashback scenes and delineation between all of Oppenheimer’s psychotic alter egos. Whenever the book uses pages dipped almost entirely in blue or orange it’s usually not off-putting, although sometimes the block pastels used for those pages can get a bit samey. It’s not a deal-breaker, and for the most part Pitarra pulls it off really well. There’s a particularly gruesome page at the halfway point depicting one of President Truman’s orgies, which hits a balance between full illustration and hinting at deeper details to be truly unsettling without showing everything happening. Kinda makes you wonder why no-one likes the Freemasons anymore.

Dialogue is pretty good. Compared to other Hickman works it’s not quite as solid, and the introspective parts used during the final issue – a solely Oppenheimer-based affair – can get a little dry. Some of the characters do come across as a little cartoonishly villainous, which I guess is kinda the point, and sadly there aren’t as many laughs as last time for me. Still damn good, but not quite reaching the excellent levels of things like Transhuman and the first Manhattan Projects volume.

At the end of the day, They Rule is an excellent addition to the ongoing MP canon. It’s good to know that seemingly minor things have significance later on, and that it appears Hickman is definitely going about things with some kind of road map. The fact that the universe we’re experiencing could literally go in any direction, given its alternate nature, is equal parts exciting and horrifying. The former, because almost anything could – and probably will – happen.

The latter, because it means our villainous protagonists could push the limits beyond what they’ve already got going for them on their resume of bad. Who wants to make a bet that the series ends with Oppenheimer birthing babies and then immediately eating them?

Oh God, I think I’ve just given myself a new nightmare.

BEST QUOTE: “You have been a very bad computer, Mister President.” – Albert Einstein