Remember having imaginary friends when you were a kid? I do. It was the first sign of the impending psychosis that would later transform me into the uncultured serial killer you see before you.

Plenty of tales have dealt with the impact, effects and implications of having imaginary friends at ages where it would be seen as a signifier of future mental problems, but rarely does one manage to strike a balance between the childish acceptability of fantasy that comes with juvenile age, juxtaposed with sprawling creative dreamworlds that make Alice’s Wonderland look like the local park.

To put that in a less ungainly way, 2011’s  Joe the Barbarian is cool.

The story deals with the eponymous Joe being bullied and harassed at school, as is the rite of passage for all nerdy heroic protagonists, before we learn he’s an eleven-year-old diabetic living alone with his recently-widowed mother in a house they’re about to be evicted from. While mummy dearest goes off to do whatever mothers do when the plot demands they leave the hero alone, Joe suffers from a bout of blood sugar deprivation so extreme that he hallucinates an intense and expansive fantastic realm of fantasy derived from his toys, his pet rat and the nightmarish dimensions of his dusk-shadowed house. The world his mind creates features a number of pop culture figureheads telling him that he is to slay the enormously powerful King Death and bring freedom to the land of make-believe.

Being a kid-friendly version of Grant Morrison’s usual drug-induced hallucinatory narratives, this carries just enough weird to classify it as properly Morrison-esque without becoming completely incomprehensible, while the toning down of extreme violence and adult elements (ok, there is some decapitation going on but the blood’s all green and gassy, like someone downed a crate of SoulStorm Brew) makes it a story younger readers can get into as well. I can’t remember if there’s swearing, though – my brain thinks there might be, but I’d have to go back and read it again to find out.

That’s not to say I’d forgo a second reading because I didn’t like Joe the Barbarian – quite the opposite, actually – but rather because the story is dense. Morrison packs an awful lot of lore, narrative, meta-narrative, character introduction, character

development, character murder and post-modern crossings between reality and fantasy that the end result is a story that’s engrossing and highly entertaining but also leaves you drained by the end of it. Keeping up with the various factions vying for control of Joe as the standard “Apocalyptic Chosen One”, as well as the expansive supporting cast following him around fighting creatures that look like the bastard offspring of the Grim Reaper and a Ringwraith, can get a little overwhelming at times. To the book’s credit almost everyone gets their moment to develop and show off some depth, and I genuinely felt sad at the narrative’s conclusion that we were leaving these interesting, nuanced characters behind. It’s only made tolerable by the rather excellent and succinct ending page that hammers home a definitive and unyielding cessation to the story, hopefully ensuring no ham-handed sequels when the suits at Vertigo declare the need to plumb recognised stories when the money pile dries up.

The fantastical craziness of the world Joe envisions is brought marvellously to life by Sean Murphy, who you may remember as the sterling writer/artist DIY combo behind Punk Rock Jesus. Unfortunately for Murphy, the problems he had with the sometimes-confusing artwork there got their beginnings in Joe the Barbarian two years prior; the art is lavish, deep and richly coloured, but at the same time the thin pencils and copious use of line shading mean that elements can be quite visually overlapping at times. Similarities in colour between separate objects can also lead to the occasional smattering together of a bunch of things that all look like one thing together – that is, the visuals can get a bit messy. It’s not enough to entirely detract from my enjoyment of the book, and if you could forgive Punk Rock Jesus‘s similar issues then you can look past it here.

It must be said, despite the above criticism, that Murphy really puts a lot of effort and love into his illustrations. They look like something laboured on intensely, so that everything looks refined and re-drawn even if it gets muddled at times. In this age of computer-aided redesigns and Photoshop being the best friend of certain creatively-deficit artists, Murphy deserves massive props for art that looks organic, lovely and cared for.

Dialogue is almost entirely Classic Morrison (I think that needs to be an official vernacular now); weird, abstract, missing bits here and there to prevent a full explanation of events to the reader. It’s exactly what I’d come to expect from Morrison as a weird-ass scriptwriter, which would be fine if it was purely aimed at mature readers. Since its goal is presumably also to appeal to some of the young ‘uns too, it might not be as serviceable as intended. It’s kind of hard for me to recommend one way or the other, since if you’re not a fan of scripting that doesn’t give you everything on a silver platter then it may not be for you. Personally I found it enjoyable and, at times, laugh out loud funny – and as I’ve said before, any comic that makes me physically emit a bellyful of joviality gets an almost instant pass on the dialogue box.

It strikes me that Joe the Barbarian is trying to be somewhere between Labyrinth and The Dark Crystal with the merest dash of The Sandman, giving us a slightly more mature fantasy that still has enough to interest the kids. The crossover between the surreal and pop culture elements is great, with appearances from famous faces like Batman and Captain Picard being chuckle-worthy on their own, and while it’s clear Morrison and Murphy are having fun sticking whatever the hell they feel like into a post-modern odyssey through hallucinatory fantasy there’s still a clear and structured character arc that enables Joe and some of his supporting players to evolve as the narrative reaches its endpoint. We’ve got interesting characters, an intriguing plot and art that can support it.

As a middle-ground fantasy for young and old readers, it’s certainly better than anything the Percy Jackson writers could come up with. 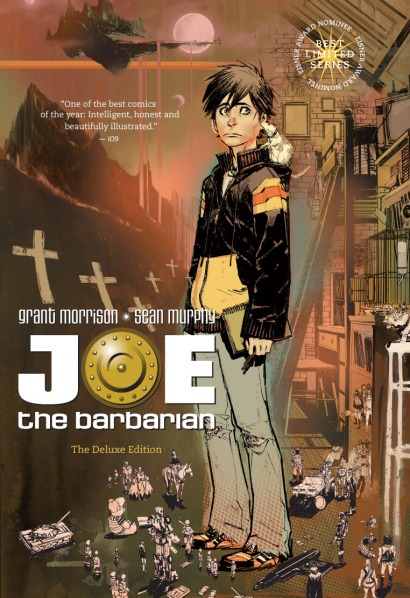 BEST QUOTE: “Help me get to the kitchen, and I’ll do my best to kick Death’s ass. How about that?” – Joe