Skip to content
Let me start by saying that it’s about freakin’ timethat another Scott Snyder-penned Bat-epic arrived on my bedside table.
As I’ve complained about before, the long wait between volumes of truly stellar DC series whilst mediocre crap like Red Hoodand Batgirl comes out is almost intolerable. If I’d gone much longer without a Snyder fix there is a chance some bodies might suddenly appear at the bottom of my apartment building. Probably with owl-symboled knives sticking out of them somewhere.
In any case, the massive multiplayer Bat-crossover event of 2012 has finally hit shelves, and the result is…well, not that simple to put in one sentence, it seems. The veritable army of writers and artists – almost on par with Avengers vs. X-Men –means it’d be a little unfair to judge the entire book in a blanket way. The different between this and AvXis that instead of telling a linear, point-A-to-point-B story with multiple authors writing the same story together, this is more like a collection of short stories all taking place within the same evening. I could give the book full marks for featuring some epic battles during the Snyder-written chapters, but it’d then get ass-monkeyed by the poor pacing and ridiculous plot of Tony Daniel’s section.
So with that in mind, each author’s portions fit into one of two categories – “Potent” and “Poor”. The former ones are awesome, the latter ones suck more lollipops than Rose McGowan’s character in any film she’s ever done.
BATMAN (Scott Snyder, art by Greg Capullo)

The central nervous system of Night of the Owlssees Bruce deal with Talon incursions within Wayne Manor itself, whilst Alfred rallies the Bat-family into action. Though brief, it’s definitely one of the better sections of the book; Capullo’s artwork nails it all flawlessly, and Snyder’s writing is still crisp and as engaging as it was during The Court of Owls. Also, “Get the hellout of my house” deserves some kind of writing award for “Best Pre-Ass-Kicking One-Liner”.
RATING: POTENT
ALL-STAR WESTERN (Jimmy Palmiotti, art by Justin Gray)

I really, for the life of me, cannot figure out what this one’s doing here. Granted, ASW is set in Gotham, but apart from that there is only the most tenuous of threads connecting this one-off to the broader Nightstoryline. It’s also fairly evident that this issue either takes place during or is at the beginning of an ASW-centric plotline, since characters refer to things that even casual readers (like me) can’t grasp without having read the preceding material. While not the worst part of the book, it is definitely the most vestigial.
RATING: POOR
NIGHTWING (Kyle Higgins, art by Eddy Barrows)

I swear Higgins could be an understudy for Scott Snyder. Or has been. Maybe. In any case, this is another standout section; tying quite heavily into both Courtand the ongoing elements of the arc Snyder introduced regarding his character, Dick Grayson has to fend off the Talon-ified corpse of his great-great-ancestor-person. In defiance of most of the following examples, there’s a strong character core going through this narrative in amongst all the balls-out action, and it works to keep Nightwing grounded during the battle and also serves to flesh out some development of the backstory of his ancestry. Pretty damn solid, and as ever Barrows delivers some of the best Nightwing artwork since Don Kramer and Rags Morales in The Great Leap.
RATING: POTENT

BATMAN AND ROBIN (Peter J. Tomasi, art by Patrick Gleason)
“Batman and Robin” is something of a misnomer here, since the story exclusively features the latter member of the duo in a rather blackly hilarious and unique little yarn whereby Robin goes off to save an army officer being targeted by the Court. While having Bruce here could only have helped the story, it still manages to hold its own by focussing solely on Damian. Plus, it shows once again why you do not ever attempt to screw with a former child of the League of Assassins.
RATING: POTENT
BATMAN: DETECTIVE COMICS (Story and art by Tony Daniel)

You can’t really be surprised, can you? It’s Faces of Deathwith a slight Court of Owlsflavour; add some incredibly awful dialogue, a perversion of one of the Bat-mythos’ greatest villains into some BS split personality disorder thing, and art that tries to be grungy a la Alex Maleev but fails spectacularlyto be anything other than formulaic and fugly. Not much else to say, except that Daniel’s later removal from the book can only help it in the long run.

RATING: POOR
BATMAN: THE DARK KNIGHT (Judd Winick, art by David Finch)
There are some comic writers who get better with age as their stories and characters mature, and there are some who remain mired in past styles of writing that end up devolving what little ability they have into random, incoherent messes. Thankfully, Winick is in the former category: it’s a reasonably strong villain protagonist story that doesn’t quite reach the dizzying heights of awesome achieved by Snyder, but is still worth reading. Also kind of unique since it’s almost exclusively told from the perspective of a Talon, which does prove to be kind of fascinating.
RATING: POTENT
BATWING (Judd Winick, art by Marcus To)
Refer to the above section; solid writing, good artwork, not quite stellar but still pretty good. Oh, and it’s not told from a villainous point of view even though Batwing’s new armour kinda makes him look like a more badass Robocop.
RATING: POTENT
CATWOMAN (Judd Winick, art by Guillem March)
Unfortunately, the polar opposite of the above two examples. The artwork is pretty stylish, but the story diverts into incoherence and Catwoman’s characterisation is so over the place that it’s kind of astonishing Winick managed to do it in only twenty-something pages of story. Also, unless she gets a boob reduction soon I’m pretty sure her flexible-back days will be over.
RATING: POOR 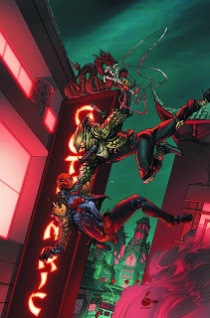 Like the Tony Daniel section above, this doesn’t surprise me either. Not a single original thought in its makeup, artwork that still does it best to make Starfire look like Katie Price, and both internal and spoken dialogue that makes me cringe with every sentence and piece of half-thought-out verbiage. Also, Red Hood calling Batgirl “Barbie” made my eyes roll so hard they made convincing dice replacements.
RATING: POOR
BATGIRL (Gail Simone, art by Ardian Syaf)
I’m forced to call this one “Potent” since the intrinsic Talon storyline – regarding a WWII child gluemaker – was actually very well thought out, but points are removed for Simone’s continued treatment of Barbara Gordon as some kind of teenager crossed with an Emma Stone ripoff through bad dialogue. Maybe keeping her permanently fired from the writing staff wouldn’t have been a bad idea.
RATING: POTENT
BIRDS OF PREY (Dwayne Swierzscynski, art by Travel Foreman)

Contrary to my feelings about it pre-Flashpoint, I was kind of interested in checking out this iteration of DC’s all-girl ass-kicking squad. That is, until I read this chapter. The ideas are kinda there but it suffers from the same problem as All-Star Westernin that it feels entirely vestigial, coming in after Poison Ivy suffers some kind of horrific attack and then ending on an unspoken promise that seems to have been alluded to previously in the series. I have no doubt staunch Birdsfans will enjoy it, but it didn’t hit the mark for me. I will admit that Travel Foreman kicks asson art duty here.

RATING: POOR
BATMAN ANNUAL (Scott Snyder & James Tynion IV, art by Jason Fabok)
This one was probably the hardest for me to decide on. While the connection to the actual Night of the Owls itself is somewhat peripheral, given that it’s a combined retelling of Mr Freeze’s origin and a present-day ass-kicking contest between him and the Bat-family, it does tie into the Court’s plans on the whole and, especially after his guest appearance in Red Hood and the Outlaws, does also root Freeze heavily in the story regardless. The artwork looks great, for sure, but where I’m drawn up short is in the story department. It feels like a somewhat unique redefinition of Mr Freeze, turning him from tragic anti-villain into full-blown child psychopath, but at the same time it feels somewhat disingenuous to the character. Part of the appeal of Mr Freeze (outside Arnie’s interpretation) is that melancholic aspect of his character attempting to revive his wive, Nora, which gives him a significant Byronic slant and sets him apart from anyone else in Batman’s rogues gallery. Now he’s a freakin’ creepy stalker with a patricide and a frozen gore fetish, and the reinterpretation of his relationship with Nora is…disturbing, to put it mildly. I wouldn’t say it’s bad per se, but I wouldn’t necessarily say I like it either. As a piece of storytelling it does its job well, but…I dunno. Something about it leaves me uneasy, and not just because Freeze is fawning over a frozen chick who could have been his grandmother.
RATING: POTENT(ish)

BATMAN: THE FALL OF THE HOUSE OF WAYNE (Scott Snyder and James Tynion IV, art by Rafael Albuquerque)
As if I weren’t already, this story has gotten me reallyexcited for the release of James Tynion IV’s Talonongoing series. He and Snyder’s writings blend near-flawlessly in this backup story regarding the death of Alfred’s father at the hands of the Court and, I believe, a rather large reveal about a character Snyder’s introduced recently. I’ll let you draw your own conclusions, but it’s definitely a great finale to the Nightstoryline that gives teases towards what’ll happen in The City of Owls, following after this one. Also, Rafael Albuquerque (of American Vampirefame) is an absolutely natural fit for the artwork here, and I’d love to see him come back for more later even if he does make Alfred look like one of the AVcowboys with that horseshoe moustache.
RATING: POTENT

BATMAN: NIGHT OF THE OWLS

BEST QUOTE: “Get the hellout of my house.” – Batman