I have one gigantic complaint for DC’s New 52 effort that has won, lost, re-won and squandered most of the comics industry over the last two years: EMPLOY BETTER WRITERS.

It’s been nearly eight months since Volume 1 of the kinda-rebooted-but-really-not Green Lantern hit my shelf (hrm, probably too many hyphens in there), and while the underwhelming introductory book has gathered dust in my bedroom I’ve waited with bated breath while all the awesome and interesting new plot twists take effect each month in reviews and recaps. I knew I’d have to wait until January to see what happens next (which is frustrating, since Volume 2’s first issue was published around the same time Volume 1 came out) because DC seem to have this maddening new policy of not releasing any Volume 2s until all the various Volume 1s are out first.

Seriously, who the f@%k wants to wait for crap like Aquaman and Batgirl to come out while awesomeness like Batman and Swamp Thing gets pushed back more months than it needs to? It’s no sin to overlap, DC. You’re in enough trouble as it is, don’t make things worse for yourself by forcing devout readers like me wait ten months for Night of the Owls.

Ok, I think I’m done whinging now. #firstworldproblems, and all that.

So after Sinestro utterly failed as an introduction for new readers to the extensive Green Lantern mythos does The Revenge of Black Hand make steps towards reclaiming the glory Geoff Johns achieved previously during his run, or have we reached the shark-jumped era of Hal Jordan’s adventures?

Following straight on from Sinestro‘s conclusion we have kinda-more-responsible Hal Jordan being caught mid-coitus (more hyphens!) and forcibly re-inducted into Sinestro’s little GL offshoot. After threatening to blow out Carol Ferris’s brains in a way Isaac Newton would spew molten vomit at, Sinestro orders Hal to help him unravel the mysteries of the ever-prophetic Book of the Black while also contending with whatever nasty shenanigans the Guardians are cooking up on this particular week. Despite initial resistance, it isn’t long before Hal re-embraces his status as a Lantern and gets involved in some deep and dark plotting involving the Indigo Tribe, an allegedly-reformed Black Hand and something ominously titled “The Third Army”, intended as a replacement for the Green Lantern Corps.

Phew. I think that’s everything. 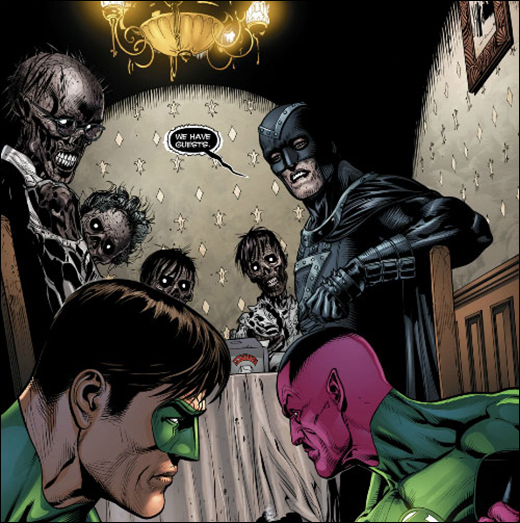 In contrast to Sinestro‘s Ke$ha-thin plot, Revenge moves at a not-inconsiderable pace. It links more and more back to the pre-Flashpoint GL saga, especially in regards to the events of Blackest Night, so newer fans may be slightly put off by all the references made before their supposed Volume 1 that make them scratch their head and reach for Wikipedia. Despite that, the story kicks a lot of ass all over the place – it’s punchy, gripping, with an involved-but-not-too-inane emotional core (sweet Jesus, the hyphens!) and some really fantastic payoffs from way back at the start of Johns’ run. There’s a scene in the middle that’s almost a direct parallel to a similar bit in Green Lantern: Rebirth, and any time the New 52 deigns it necessary to link back to its better, less greenback-driven days it makes me happy indeed.

Having said that, the branching out to touch on the other GL titles is done poorly. We get a few panels here and there, during the Guardians’ creation of the Third Army (who incidentally look like what I imagine most 4chan denizens resemble), where references are made to the little blue baldies also gunning for John Stewart and Guy Gardner, resident protagonists of the Green Lantern Corps series, and Kyle Rayner’s merry band of multicoloured misfits, the stars of Green Lantern: New Guardians. For someone like me, who keeps sorta up to date on all this, it’s alright, but I’m willing to bet most casual readers will be digging out the iPad and finding Wikipedia once again when that all happens.

On top of that, the Guardians’ motivations feel wonky. Long-time readers have known for yonks that they’ve secretly got it in for our Guys in Green, but there’s still almost nothing revealed here as to why. Is it because the Third Army are meant to embody that lack of emotion the Manhunters had alongside the organic competency and ability to innovate that the Lanterns possess? Or are they just bored with life and, not unlike Lindsay Lohan when she robs a jewellery store, trying to piss a load of people off when they feel there’s nothing better to do?

I have no doubt we’ll get more information on that front as time goes on, and as always I trust Geoff Johns to work it all out. He might’ve backed the movie, sure, but he also gave us Saint Walker. You can’t really fault him after that.

On that note, the artwork is the usual Doug Mahnke standard – big-lipped and full-figured, in the best way possible. There seems to be a far greater variety of colour than in previous books, and the human faces look less like Mandrakk the Vampire from Final Crisis and more realistic. I’m still not entirely sold on Carol Ferris having Usain Bolt’s abdominal muscles, but I guess she needs to have a hobby beyond screwing Hal and being Queen of a space empire.

Scripting feels a lot tighter and crisper than in Sinestro, and more of a return to form. The grudging-buddy-cop relationship between Hal and Sinestro (which has no shortage of more goddamn hyphens!) works well, and especially in moments like the halfway point – in which Hal revives Sinestro and tells him the tables have turned vis a vis their rings – it’s enough to make you out loud. Which is good, since Sinestro was about as funny as cracking your skull on a pool step.

I still feel, though, like we’re past the salad days of Geoff Johns’ Green Lantern run. We had an epic climax during Blackest Night with a lot of good buildup, the Brightest Day fallout worked marvelously as a segue into War of the Green Lanterns and the final expulsion of Hal from the Corps, and now everything after it feels a bit forced. It’s still good, don’t get me wrong, but it feels like we’re over the peak. The best has happened. I guess, especially since Blackest Night is my favourite GL story yet, it gives us unrealistic expectations that Johns will have to work hard to top the immensity of what he’s already done.

So, in the end, The Revenge of Black Hand gets a recommendation. Like Sinestro, it’s better if you’ve read the run up until now, but casual readers may still get a kick out of it. The book does act as a clear indicator that we may need to lower the bar just a bit to avoid further disappointment – unless Nekron somehow reappears and we get Blackest Night 2: Rainbow Boogaloo.

BEST QUOTE: “A Green Lantern? And an ugly one at that!” – Natromo