I’ve spoken at length about the impact a crossover can have on either of the Big Two’s storylines, both good and bad. If it’s a year-long, heavily-hyped event it can hurt or hinder a company’s integrity, a storyline’s enjoyment factor, and a character’s awesomeness. Good crossovers innovate the story, provide consistent and engaging characterisations and give a finale that at least carries some air of originality and anticipation. Bad crossovers have nothing but fight scenes, two-dimensional characters and an over-reliance on protagonist mortality rates to increase expectations for an explosive finale that ultimately fails to deliver.

So, having spent the year anticipating its hardcover release, which camp does Avengers vs. X-Men fit into?

After reading all the required prologues (which, in actuality, are probably as long, combined, as the main story itself) I felt I was quite ready to get into the intricate, carefully-planned and multi-layered story of AvX that promised great fight scenes, awesome art, good dialogue and a thought-provoking argument presented by both sides of the conflict that makes them not so much ‘teams’ as they are opposite sides of a disagreement with separate, but equally valid, reasons for disagreeing. The premise involves the Phoenix, a mega-powerful cosmic force that does bad things to good people, arriving at Earth and threatening to blow the crap out of it – and seriously, why do all crossovers at the moment rely almost entirely on blowing Earth up? Can we not have a villain with a major vendetta against one of our protagonists, a la Skyfall, or someone that wants to hurt the heroes themselves rather than dominate or annihilate our piece of intergalactic real estate? Is Earthly destruction the only plot device the writers can conceive these days?

Whatever. The Phoenix approaches Earth and everyone believes it’ll use latent mutant Hope Summers, aka the Mutant Messiah, as its host when it lands. In one corner we’ve got Captain America and his band of Liberal-esque Avengers who want to stick Hope in some kind of superhero Guantanamo Bay to prevent the Phoenix getting her, and in the other we’ve got Cyclops and his host of Democrat X-Men who want the Avengers to piss off and let things happen as they may, with Cyclops himself believing the Phoenix’s arrival heralds an end to the “no more mutants” declaration made by Scarlet Witch all the way back in House of M.

Using political parallels in that last paragraph is making the story seem more intelligent and thought-provoking than it actually is, because by the midpoint of the book the argument becomes null and void and the teams-with-equal-validity thing gets pissed against a wall when the narrative takes a decidedly one-sided slant against the X-Men, who end up being portrayed as a mashup of the Hitler regime and the Ubermensch concept. The story tries what Civil War did, giving us two sides of the argument that we can root for either way, but it all falls flat when the X-Men start creating a Utopia, if dictatorial, society that seems hell-bent on killing anyone even slightly Avenger-shaped, and the Avengers themselves become the equivalent of Will Smith’s character in Enemy of the State.

To stop beating around the bush, the story is stupid. I feel like the moral conflict is presented very two-dimensionally and doesn’t engage me the way Civil War did, and even that book didn’t quite live up to expectations. This feels like a narrative born almost solely out of marketing rationales, giving us the “let’s you and him fight” fantasy aspect that The Avengers movie pulled off well but this book relies way too much on. Yes, it is kind of cool to see Cap and Cyclops go at it like a pair of jilted ex-lovers. Yes, seeing X-Man Magik beat the crap out of Black Widow with a magic sword is sweet, if a little fetishised in the artwork department. And yeah, the grand-scaled football match-style battles where both teams brawl like a bunch of Orks in a Blood Bowl game looks gorgeous and does carry quite a bit of awesome behind it. 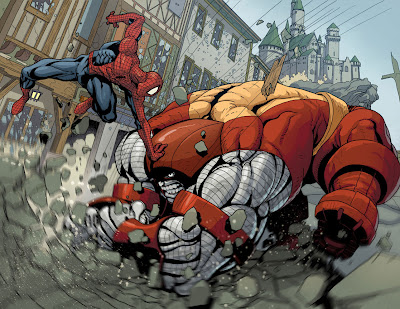 But that’s really the story’s only strength, having bust-ups between heroes we know and love against mutants we know some of and think are kind of ok. As I said, the moral centre of the story gets thrown against the wall and pummelled repeatedly by the story’s midpoint, and the thin-on-the-ground narrative progression in the story’s latter half just makes the whole effort laughable. So much of the story feels like artificial padding, and it’s clear they could’ve made a far more satisfying story if they’d halved the number of issues, tossed out a few of the writers and worked on it solidly for a few months extra rather than rushing it out to get the entirety of the narrative in stores by year’s end.

On that subject, the veritable army of writers and artists give both characterisation and illustration a degree of schizophrenia. Granted, most of that army is made up of some of the best talent Marvel has on tap at the moment, but I feel like they were all watered down by whichever marketing figure was behind the whole mess. Jason Aaron’s dialogue during his chapters doesn’t feel anywhere near as snappy and crisp as it did in X-Men: Schism, Ed Brubaker doesn’t sound like Ed Brubaker during the bits where he wrote Cap’s dialogue, and Brian Bendis’ usual flare for great conversational dialogue with elements of realism intertwined with the superheroic paranormal isn’t present.  It’s all rather disappointing since these are supposed to be some of the premier writers at that overgrown marketing machine they call a company, and yet they all feel incredibly bland.

The artwork gets a bit of a markdown in that area as well, not least of all because they got frikkin’ John Romita Jr. in to do the first half of the book. For those not aware, Romita Jr.’s father (John Romita Sr., funnily enough) did some great artwork back in the heyday of superhero comics, but his son’s work doesn’t come close to matching it. It’s way too reliant on overshading and too many lines of facial definition, and really threw me out of the story with its overly-cartoonish look (see the image above for an idea of what I’m on about). The latter chapters done by Adam Kubert and Olivier Coipel were a lot better, so while the story floundered in mediocrity the artwork was definitely putting the hammer down (especially when Thor was around).

For those of you not facepalming about how terrible that last pun was, you’re probably asking me if, in the final analysis, Marvel’s massive multiplayer crossover for 2012 was good or not. In short, no. It left me very disappointed, especially for an event that was touted as both the end of nearly a decade’s worth of storytelling arcs (starting with Avengers Disassembled) and also as the jumping-on point before Marvel’s NOW! relaunch last October. Flashpoint managed to act in that latter capacity quite well, with less than half the issues AvX used to get the job done, and as such proved you don’t need an entire omnibus worth of issues to finish the story off.

Avengers vs. X-Men is one of the most disappointing, lacklustre crossovers I’ve ever read from either company, and if the announcement for the Bendis-penned ten-issue Age of Ultron crossover in 2013 is any indication we can expect more of the same there. Personally, I’ll stick to Rick Remender and his awesome new run of Uncanny Avengers. At least its dialogue doesn’t sound like the marketing department had too many hands in it.

BEST QUOTE: “One thing I’ve learned about being an Avenger…your moment will come. It’s a big group. Lotta moving parts. Lotta big awesome people doing big awesome things. They don’t always have time to stop and take a knee to explain to you what the heck is going on. You learn to follow the guys who always seem to know where they’re headed. And you wait for your moment. Doesn’t matter how many gods or super-soldiers or Hulks they got on the payroll. Once you’re an Avenger, it never fails…sooner or later the time comes when it’s your turn to step up to the plate. You just gotta make sure you’re ready.” – Spider-Man