Wow, it’s been far too long. I really haven’t realised until now just how much I enjoy writing these reviews of scathing wit and appalling self-effacement. This must be how Jerry Springer feels.

The thesis took up a lot of my time towards the end, and in part it demanded my attention be taken away from actual comic books (ironic, considering what my thesis topic was). So while I was raring to get back into the swing of things after submission on October 4th, I found I was devoid of suitable material for a review – unless I do another classic review, which I think you’re all so sick of that the words “PLEASE BE CONTEMPORARY” are permanently etched into my letterbox with a sharpened stick.

So, let’s dive back in with a poor follow-up to a series I actually thought was great. What a way to bring myself back into the comic book fold.

I may have mentioned previously (somewhere on this blog or my other “serious” one) that one of the changes I found most reviling in the New 52 was the removal of former Spoiler Stephanie Brown as the current Batgirl, replacing her with old-hand Barbara Gordon. You may remember the latter as paraplegic superheroic icon Oracle, also know as the best Voice with an Internet Connection since Cortana from Halo (and, for the record, twice as sexy). Unfortunately, since there seems to be no shortage of creative bankruptcy in DC these days, Barbara’s been taken out of the wheelchair – with many of the unfortunate implications that creates – and thrown back into the retro suit of yellow and black armour with contemporary line articulations thrown in for good measure. After several months of physical therapy she’s tasked to take on the villainous Mirror, a dude who looks like a cross between Batman, Havok from X-Men and the Nightingales from Skyrim, who’s going around killing people who’ve been blessed by miracles (such as Barbara’s unexplained spinal recovery).

While I had a good inkling I wasn’t going to like this book, I wasn’t prepared for how annoying it is. It’s not Faces of Death but it’s still pretty bad. Obnoxious is probably the word I’d best use to describe it. The action is overwrought, even for a Batman title, the characterisation is sloppy and far too schizophrenic – with Babs switching between testosterone-chugging confidence and naive schoolgirl wallflower at the drop of a hat – and the story is paced like a malfunctioning escalator, stopping and starting all over the place. I know part of the New 52’s schtick was de-aging some of the characters to keep them contemporary and not the brittle-boned octogenarians they would be if they were real today, but they seem to have turned Barbara Gordon’s dial on the Way-Back Machine just a bit too much. She reminds me – especially in dialogue – of Stephanie Brown in all but name.

Wait, hold on, I should give some context here for those of you who aren’t predisposed towards watching teenage girls in tight bodysuits fight supervillains.

The Stephanie Brown run in Batgirl – back when Bruce Wayne was dead and continuity still mattered to the writers – was written by Bryan Q Miller. It was a fun, rollicking adventure with Barbara as the Obi-Wan and Steph as the slightly precocious yet very enthusiastic inheritor of the BG mantle after her predecessor ran off to join the army. The angst was set to minimum, the characters were well-rounded, the story was impressively paced and the dialogue was somewhere between Joss Whedon and Mark Waid in terms of enjoyable-ness. I friggin’ loved it, and the unnecessary change to Batgirl‘s winning formula post-reboot made me extremely hesitant to check it out. The fact that Gail “High-Horse” Simone was writing it didn’t help.

This must be how fans of Knight Rider and Charlie’s Angels feel after comparing their beloved 80’s schlock against the 2000’s reboots of the past few years that performed as well as a Dalek doing a trapeze act. I was severely let down by The Darkest Reflection and not because I figured I’d dislike it. I try to go into these new books as unbiased as possible – look no further than Superboy – but I just found it a bit difficult in this instance. The dialogue alternates between cringeworthy and just plain boring, and very much reinforces the notion that Gail Simone skinned Stephanie Brown, put a Babs lookalike’s appearance over the top, then brainwashed her into having pretend psychological issues about her former lack of mobility. I get the sense Barbara’s not so much an adult woman (as she was during her Oracle tenure) but rather a just-out-of-high-school teen who is a set of braces and a sleepover party away from being Katy Perry in Last Friday Night.

As with Faces of Death, the biggest points go to the artwork. Ardian Syaf is to be congratulated for taking a lackluster, underwhelming piece and really buffing it up in the art department. There’s full colour, fleshed-out tones and no shortage of really gorgeous panoramic panels, even if he does make the sky purple a few too many times. While some of the aforementioned articulation lines are a bit unnecessary, it’s still damn pretty. If we could set the Way-Back Machine to September last year and have Bryan Q Miller as writer, replace Babs with Steph and keep Mr Syaf as lead artist, we’d have a superior book that could rival some of my current contenders for best graphic novel of the year.

As it stands we’re left with a slow-moving, dialogue-heavy cringefest that carries the same narrative weight as an episode of Jersey Shore. There is some good character development during a brief interlude in the middle with Nightwing (including the worst use of a ballet metaphor I’ve ever read) but apart from that it’s boring, poorly executed and unengaging. If I wanted teen angst peppered with the odd punchup, I’d read Twilight. 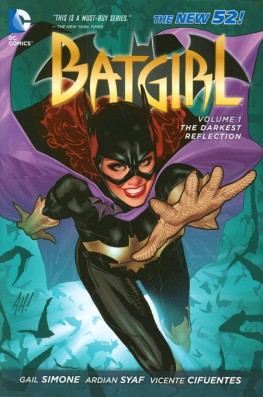