I love Star Trek. My two favourite series are easily The Next Generation and Deep Space Nine. They’re quite literally apples and oranges; TNG focuses on slightly cliche monster-of-the-week episodes, while DS9 gets progressively more dramatic and serialised as the seasons go on. I like both styles of storytelling, though I do lean more to the latter for longer-form narratives. In either case, both series relied on strong, nuanced characters which were well-suited to their respective styles; Jean-Luc Picard may not have had Benjamin Sisko’s wartime character journey for seasons at a time, but the standalone nature of TNG was threaded with subtle character development which made Picard a consistently evolving figure for each new episode’s dilemma.

I say this upfront to let you know that I’m not opposed to more standalone, episodic storytelling in our modern age of binge-watch Netflix and the ongoing serialised sagas of Batman and Thor. This is to then contextualise my belief that the poorly-sketched characters and cliche episodic storytelling of Amazing Spider-Man: Worldwide just do not work.

Peter Parker has somehow won the lottery – I presume, since there’s not much explanation for how he suddenly became a billionaire – and founded the tech company and worldwide (ha!) philanthropy effort, Parker Industries (acronymed to P.I., because math joke). The newly-minted CEO finds his time split between running a global company, being Spider-Man, directing some other guy to be Spider-Man when the first thing conflicts with the second, and having an increasingly tense relationship with SHIELD. Into the mix comes a new incarnation of the Zodiac, a criminal supergroup whose sole purpose is to spout inane dialogue while hitting every star-sign cliche in the book. Though he risks burning his candle at multiple ends, resulting in a big ball of lumpy wax, Peter must save SHIELD, his company, his aunt and, at one ludicrous point, the British Museum from the Zodiac’s machinations.

To be fair, Worldwide isn’t technically its own thing. It comes as the latest installment of Dan Slott’s behemoth Spider-Man saga, where Spidey dies, is possessed by Doctor Octopus, reclaims his body, meets a bunch of multidimensional versions of himself, then founds a billion-dollar philanthropic company (somewhere in there he also, presumably, visits the bathroom). I’ve never been a big fan of Slott’s work, though I did end up appreciating the superlative “villain protagonist” tale of the Doc Ock-possessed Superior Spider-Man.

Slott doesn’t draw me to his magnum opus the way Grant Morrison did with 7 years of Batman, even though he’s clearly trying to move in the same operatic direction the crazy Scotsman did with the Dark Knight. A big part of the problem is that Slott cannot write characters or dialogue to save his life, relying on trite cliches and inane banter at almost every turn. Sure, as per usual Spider-Man riffs on his team-mates with popular culture references and unbridled (mediocre) snark at every opportunity, but even the sterling characters Slott had a hand in creating – notably Anna Maria Marconi, ensemble darkhorse of Superior Spider-Man who’s relegated to little more than a cameo role here – seem to have lost a dimension or two in the interim. Superior benefited from the richness and depth of its ancillary players, making the story feel more like an ensemble piece than the eponymously-named protagonist’s journey it was marketed as. All such depth, as a continuation of Slott’s work, seems to have been filled in with gravel.

The supporting cast can do little but mouth dialogue which sounds like it was written for a badly-acted telenovela. A series of key scenes where Spidey and Mockingbird team up to save Aunt May and some African villagers is crammed with wall-to-wall verbal detritus which merely shows the former is arrogantly cocky and the latter is stern, as if we didn’t know that already. A punch-up between Spidey and the Human Torch – in the refurbished Baxter Building, no less – reads like it’s shooting for a Joss Whedon Avengers-style lackadaisical quality to highlight the fight’s inherently contrived nature, but is instead a juvenile exercise in pitting two young men against each other with the mindsets of twelve-year-olds. A dance at a wedding between Peter and his business partner flits between romantic allusion, corporate game-planning and insinuated threats in the space of less than a page, with no smooth transition between tones. If there’s any intended irony in Slott’s kindergarten-level dialogue, it remains as elusive as a Dragonite in Pokemon GO.

With such poor characters behind the wheel, the story is beyond the help of even the staunchest automotive technician. In contrast to Superior‘s character-based, Doc Ock-led odyssey into anti-villainy, almost everything that happens in Worldwide is plot-driven with minimal meaningful character involvement. You could very easily swap Spidey for any of his Avengers cohorts – Iron Man would probably work best, a fact the story quickly and repeatedly points out in its opening chapter – and no-one would bat an eye, so formulaic and boilerplate is the plot. Each chapter centers around a problem that needs to be solved – usually the Zodiac doing something naughty – which is swiftly addressed before some vague foreshadowing for future problems at the chapter’s conclusion. There are some intriguing notions of Peter’s philanthropic, corporate and SHIELD responsibilities muddying the waters of his regular modus operandi, and how his long-standing promise to always save Aunt May before all else could also compromise his new responsibilities to go with such great power. The notions the story hints at could’ve made for a far more engaging, subversive take on the Spider-Man status quo.

Sadly, such notions are clearly not intriguing enough for Slott to comprehensively develop them. No, Slott would much rather focus on all of Spidey’s new Batman-inspired hardware; go on and tell me the Spidermobile, pictured above, isn’t just a Tumbler repaint. Or, worse still, he’d prefer to develop a latent plot thread which is both utterly asinine and a complete undercutting of Superior Spider-Man‘s emotional ending. I won’t spoil the latter here, but it’s in the first chapter; I dare you not to imprint your palm upon your forehead when you see it. 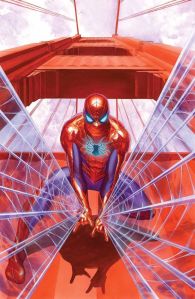 As with so many other mediocre books, the one area Worldwide succeeds in is the artwork. Giuseppe Camuncoli is a welcome addition, offering a more reasoned and realistic counterpoint to Humberto Ramos’ more exaggerated, cartoonish style in Superior. The panels can be overloaded with colour at times, and several of the fight scenes – including the aforementioned ludicrous defence of the British Museum – are a bit incomprehensible, but for the most part Camuncoli does solid work. The covers for each chapter are also done by Alex Ross, superhero artist par excellence, so those are welcome additions.

Reading over this review, I realise I’m coming off as overly harsh. Worldwide isn’t a bad book the way One More Day, No More Humans or Great Pacific were bad books. It’d 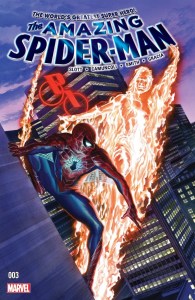 be considered merely “meh” if it weren’t for the surging river of resurgent superlatives that Marvel’s churned out over the last few months. Paired with its compatriots, Worldwide is little more than a bauble, hopefully only a postscript to Slott’s objectively stronger previous work. I understand a writer being passionate enough about a character to stick with their book for as long as you can – this is part of what started to kill the third act of Geoff Johns’ Green Lantern run as it reached its overdue climax – but maybe it’s time for Slott to move to another comic. The logical step after Worldwide is to have Spidey run the Avengers, then the world itself, then the universe. After that, the crossover event Secret Wars: Beat Pete will follow Marvel’s heroes trying to unravel a multiverse firmly controlled by the Parker Empire. Best quit while you’re ahead before we reach the turgid fanfic stage, Mr Slott.

BEST QUOTE: “You haven’t known Mockingbird long, Prowler. She says arm up, you break out the nukes.” – Nick Fury