There is nothing and nobody in the world that is above criticism. If there were, we wouldn’t have the love we do for something as horrible as The Room or Battlefield Earth.

When viewing the world – or, at least, aspects of it – through the ignorance of the rose-tinted glasses our species tends to have as a permanent fashion staple these days, it’s easy to just assume some things we enjoy or respect will maintain airs of consistent positivity. You’re sure the next episode of The Walking Dead will be as awesome as the rest of the season has been so far. You know James Cameron can’t possibly make a bad film, not with poles like Terminator 2 and True Lies propping up his tent. And hell, if Scott Snyder – the scribe behind one of the best Batman stories of the last decade – decides to write something not related to charcoal-clad guys punching other charcoal-clad guys in minimum lighting, chances are it’ll be friggin’ sweet. 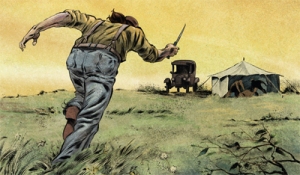 The first indie Snyder story not done under a DC or Vertigo imprint, Severed is an Image Comics tale centred in the early 1900s on a young virtuosic fiddle player named Jack. Upon learning he’s actually adopted he sets out to find his father elsewhere in America, unaware that an old man with absurdly sharp teeth named Alan Fisher is hunting him and other boys his age in order to gobble them down faster than Cookie Monster with a box of Oreos. With a distinct horror genre slant, the tale explores Jack’s quest for his father as well as an attempt to assert himself in the big bad world as a young adult.

Let me just clarify something – Severed isn’t a bad book per se, but it’s not a great book either. It’s kind of a hit and a miss all at once, combining great ideas with poor execution.

For example, the impetus behind Jack leaving his home in search of his father is a chestnut well-worn, sure, but it still provides an intriguing character arc if done right and not played as a cliche pathway to adulthood. While the arc itself is constructed slightly out of left-field, it’s still executed with a bit of a lame ending. Further on, Jack meets another young boy named Sam who actually turns out to be a girl pulling a bit of a Twelfth Night-esque disguise, and while their friendship starts out in an interesting way it’s later abandoned at the half-way point for reasons that still aren’t clear to me, leading us right back to square one with the “boy finding his father” motivation.

On top of that the villain, Alan, is creepy but only to a point; while he’s got teeth to rival the Osmond family and a strange fetish 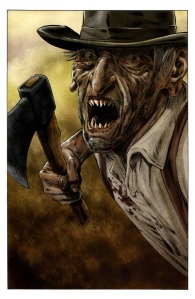 for devouring enterprising young men, there’s not much else to him but that. Snyder plays up the enigma of what exactly Alan is (a vampire seems like the obvious answer, but he takes the blood consuming thing a bit too far to be Bill Compton) but beyond that he’s just a nutter eating kids with some impressive dental work. His pathos isn’t particularly deep, not that it necessarily needs to be, but I found myself more creeped out by his surroundings than he himself. It’s kind of like if you had your school principal threatening you with detention while you stand in the darkened castle from Amnesia: The Dark Descent, except this time it’s a bit more well lit.

Speaking of, the artwork by Attila Futaki is pretty awesome. It’s got that painted feel that artists like Alex Ross have, and while it starts off being illustrated a little too dark and dank for a story opening it ends up becoming better defined as the narrative progresses. As I said I found the surroundings more haunting than the villain, including a darkened forest with an old subway car and the house within which Jack and Alan have their final showdown that has just the right amount of macabre lighting and hints of visual emphasis to give it a harrowed, visceral appearance. The only real problem with Futaki is that sometimes he illustrates female characters like Sam with distinctly man-ish properties, including a scene where I swear Sam has an Adam’s apple. I get that she was supposed to be disguised as a dude, but I’m pretty sure she shouldn’t resemble that after the reader knows otherwise. 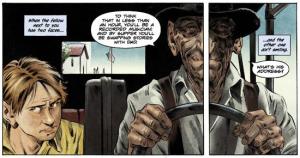 Dialogue is ok. Not Snyder’s usual level of excellence and snappy ripostes, but I guess that’s hampered a bit by the time period the story takes place in; you can’t exactly have the same biting wit as today with 1920s lingo. Jack can feel a little two-dimensional at times, even for a horror story protagonist, and some of Alan’s lines cross the border from horror into implicit pedophilia which, while obviously part of his character, can be a little unnerving when read in a dry, throaty old man’s voice. That’s not necessarily a mark against it, but it does make me want to scrub myself and read something straightforward and uplifting like Game of Thrones afterwards.

At the end of the day, Severed is a pleasant enough distraction that doesn’t live up to the name Scott Snyder’s made for himself. Granted, this time around he worked with collaborator Scott Tuft (I wonder if, to spare confusion, they were referred to by surnames during the planning of this story. “What do you think, Tuft?”) so he can possibly be forgiven for some of his missteps here and have the blame attributed to his writing partner (“It’s all your fault, Tuft!”), but even so it leaves us with a story that is a decent read but ultimately kind of forgettable. It could possibly be enlivened somewhat if you imagine the villainous Alan giving all his lines in the voice of Eustace from Courage the Cowardly Dog, which could have the added bonus of making that show even more awkward to re-watch later. 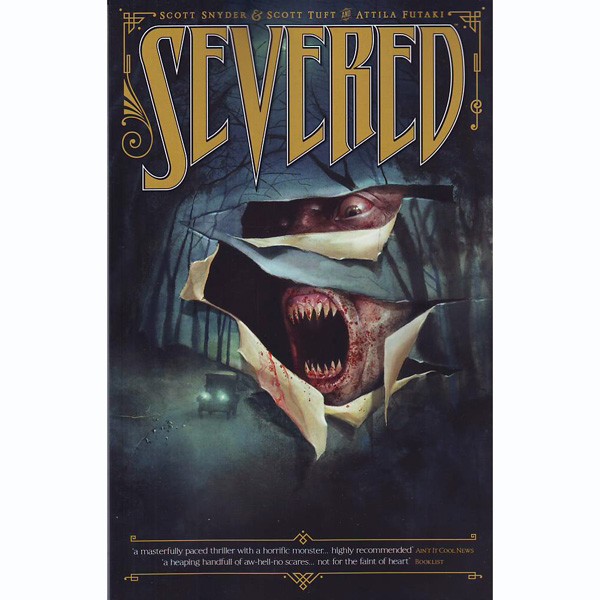 BEST QUOTE: “The road ain’t all fun and games…you gotta be tough. Anyone tries to bamboozle me…I bite their leg off.” – Alan Fisher